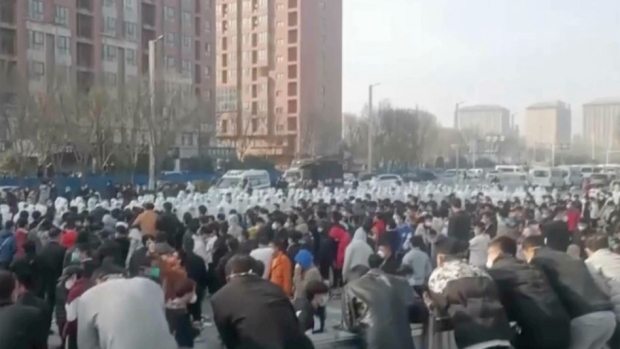 Hundreds of Foxconn workers in China's Zhengzhou district violently clashed with police after the company changed contracts to reduce their salary and mixed workers infected with Covid with those who were not.

The district, which is also dubbed as "iPhone city" has been locked down under the government's Zero covid policy which has not helped. Many workers have also fled the factory, and the district itself over frustrations about how how they have been getting insufficient food rations.

One worker live streamed that Foxconn changed its contracts so that workers could not get the subsidy as they had promised.

"They quarantine us but don't provide food," said one Foxconn worker during his live stream.

The Tame Apple press has been putting the entire blame for the issue on China's Zero covid policy claiming that workers would be happy to build iPhone's for no money or food if it was not for the pesky lockdown. In fact, the main focus of US reporting of the riots has been how there will be a supply shortage of iPhone 14s before Christmas.

"Both Apple and Foxconn are taking preemptive steps to reduce the short supply by boosting productions in Foxconn's Shanghai, China and Chennai, India plants," reported  Bloomberg. Manufacturer Foxconn said it would work with staff and local government to prevent further violence.

In its statement, the firm admitted some workers had doubts about pay but that the firm would fulfil pay based on contracts. It also described as "patently untrue" rumours that new recruits were being asked to share dormitories with workers who were Covid-positive.

Dormitories were disinfected and checked by local officials before new people moved in, Foxconn said.

To give the problem some scale, Foxconn's Zhengzhou plant is the company's largest factory in the world and employs more than 200,000 workers, so not paying them or feeding them properly so Amercians can get their phones in time for Christmas is a bit of a crime.