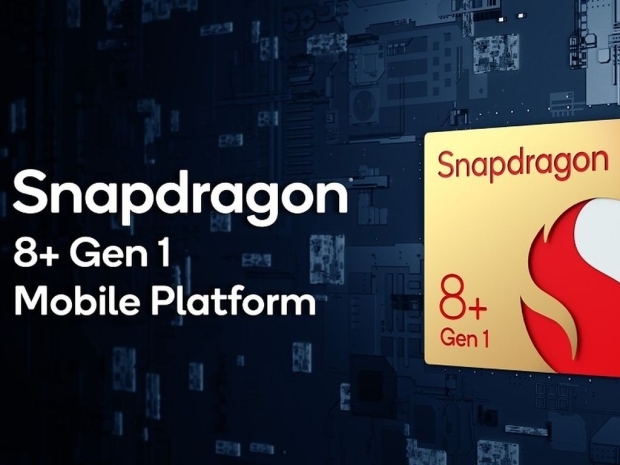 Qualcomm recently launched a new flagship Snapdragon 8+ Gen 1 and proved it still can maintain a significant distance between its nearest chipset competitor.

In December 2022, the company announced a new benchmark in the high-end phone market, the Snapdragon 8 Gen 1. It launched in hundreds of new phones and is powering all Oppo, Vivo, Xiaomi, and even Samsung high-end phones. Just short six months later, the company announced a next-generation updated SoC branded as Snapdragon 8+ Gen 1. The company has confirmed in a briefing that the new Snapdragon 8+ Gen 1 is using a new TSMC 4nm manufacturing process. The new SoC has 10 percent high CPU and GPU performance but thirty percent higher efficiency.

The fastest high-performance Cortex-X2 core is now clocked at up to 3.2GHz, performance cores now go to 2.75GHz and efficiency cores go up to 2.0GHz. This is a significant boost in clocks across the board, with the Snapdragon 8 Gen 1 working at 3.0GHz, 2.5GHz, and 1.8GHz, respectively, but this is just the tip of the iceberg.

The key gain is in the efficiency that will enable games to run longer, phone apps to work for a longer time, and even significantly longer voice and video calls. Video calls via apps are on the rise, and running a camera and display all the time, seems to be a significant edge case scenario for many customers. Pandemic learned us the importance of video telephony that was just enforced by WiFi6, WiFi6E, or 5G, whatever fast connection was at your disposal.

The Adreno GPU is also 10 percent faster. What was already the fastest GPU in the Snapdragon 8 Gen 1, will now get significantly faster with a ten percent boost. Even the GPU gets thirty percent battery power efficiency. Customization is the key as Adreno GPU has been redesigned and developed from scratch, build to exceed the power of Mali or Imagination Technologies GPUs that competitors use. The new GPU continues to support the full Snapdragon Elite Gaming arsenal including Variable Rating Shading Pro, and Volumetric Rendering for hyper-authentic graphics like fog and smoke.

The 7th Gen Qualcomm AI Engine will also run faster. Qualcomm didn’t distinguish the performance gains but the fact that CPU and GPU play a significant role in overall AI performance will have to result in some gains. Once the device ship to customers, one will be able to measure them. The 3rd Gen Qualcomm Sensing Hub, featuring a Low Power AI System, is always-on, yet secure, and automatically tracks your activities and surroundings. The AI Engine has support for mix precision (INT8+INT16)  and support for all precisions (INT8, INT16, FP16) that will be enough for any kind of AI workload.

Snapdragon Sight  features our 18-bit ISP that captures 4000x more camera data than its 14-bit predecessors. It can also capture 8K HDR video and mega low light photos. Just to set the record, Apple is yet to come with 8K recording on its phones, not to mention the lack of HDR in the super high resolution 8K videos.

The Snapdragon sight has the ability to take 30 snaps in Mega Low Light Mode and merges the best parts into one shot for brighter, clearer, more colorful photos after dark.

The result is clear, Qualcomm Snapdragon 8 Gen 1 powered Honor Magic4 Ultimate is the number one phone in the prestige DXO Mark camera test. Since a year-old Xiaomi Mi 11 Ultra with a Snapdragon 888 still holds an excellent place at number three, there is a good indication that with Snapdragon 8+ Gen 1 we might get a new order on the leaderboard.

It all comes down to the performance and capability of your modem. It often gets forgotten in a bushel of features but without connectivity, there isn’t much to do with the phone. The 5G X65 modem supports millimeter-wave something that Dimensity 9000 one of its main competitors doesn’t. Qualcomm supports millimeter waves for three generations now, while we are yet to see a high-end Dimensity supporting it.

Millimeter waves got a lot of traction in the US market and are slowly gaining popularity in the rest of the world.

Oppo, Vivo, Xiaomi, Samsung, Honor, OnePlus, Realme, and many other phone manufacturers are using Snapdragon 8 Gen 1 for their flagship phones. The Dimensity ends up in some of the designs, but it is never a flagship design.

Oppo paints a good picture of where things stand. Oppo Find X5 Pro is powered by Snapdragon 8 Gen 1. The runner-up Oppo Find X5 is using last year's Snapdragon 888 while the Oppo Find X5 Lite is using Dimensity 900. That is how one of the leading manufacturers' positions in high-end phones for the time being.

Xiaomi also uses the Snapdragon 8 Gen 1 for its highest-end flagship phones, realme is during the same and so does a very popular OnePlus. The other chipsets are being used for the runner-ups.

We expect that the best scoring phones of the second half of 2022 will come with Snapdragon 8+ Gen 1. The real mix is not just the CPU and GPU-centric benchmarks, it is rather a mixture of functionality, performance, and features dominating with fast connectivity, AI, and especially camera performance. That is where Qualcomm proves its leadership position.

Last modified on 09 June 2022
Rate this item
(5 votes)
Tagged under
More in this category: « Apple stops new USB-C devices talking to the operating system China benefiting from western smartphone sanctions in Russia »
back to top