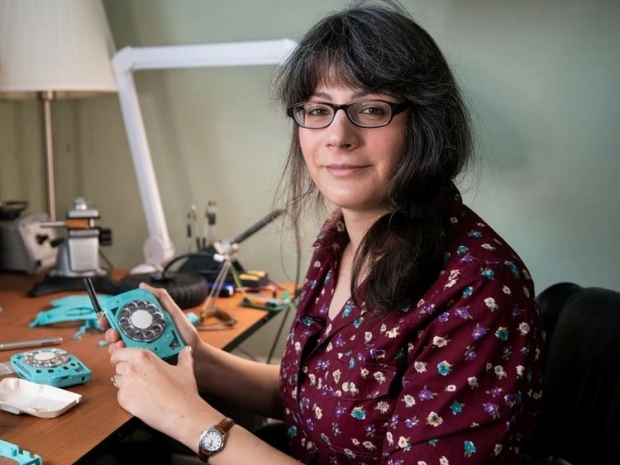 Justine Haupt, 34, hates smartphones and has built her own with no LED screen, a clunky antenna and a rotary dial.

While the rest of the world has canonised Steve Jobs for stealing the idea of smartphones, Haupt told the New York Post that she hates the culture that has built up around the mobile devices.

“I’m an engineer, I love technology”, Haupt, who has never owned a smartphone, tells Newsflare. “But the phone is not the way I want to do it.”

“It fits into my pocket and, in total bulk, I don’t think it is much bigger than a large smartphone with a protective case on it”, she says.

Haupt who works at the Brookhaven National Laboratory, wanted an “even more dumbed down phone” — primarily because she hates texting.

“I’ve never texted, and building this phone was in part so that I would have a good excuse for not texting”, she says. “Now I can hold up this phone and say, ‘No, I can’t text.’ ”

She thinks the smartphone interface is absolutely horrible. “When you open an application and then you want it to go away, but you don’t know if it is closed — that grates against the fibre of my being”, says Haupt.

So when she decided to build a prototype, the first thing she decided was that she wanted a rotary dial. She sourced a spare from an old Trimline telephone — a wall-unit style that was popular in the ’60s and ’70s, with a compact dial that would have been able to fit in her pocket.

For the inner bits she used a radio development board from Adafruit, a hardware company, and designed her own circuitry. Then she used a 3-D printer to create a case.

She added two speed-dial buttons, one labeled “La” and the other “Da” — for her mother, Lorraine Labate, 60, and husband, David Van Popering, 57.

She also added a small e-paper display — like a Kindle screen — to be able to see incoming text messages and missed calls.