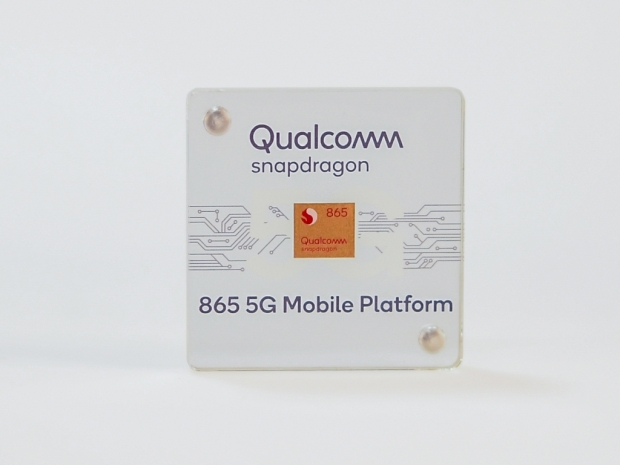 At the annual Snapdragon technology summit in Hawaiian island Maui, Qualcomm revealed the latest flagship Snapdragon. After 845 and 855 comes the, well you might guess it the Snapdragon 865.

This is a 7nm SoC with new Kryo 500 series CPU cores and the new Adreno 650 GPU, new AI Tensor cores, new DSP and Spectra ISP and of course the 5G modem. 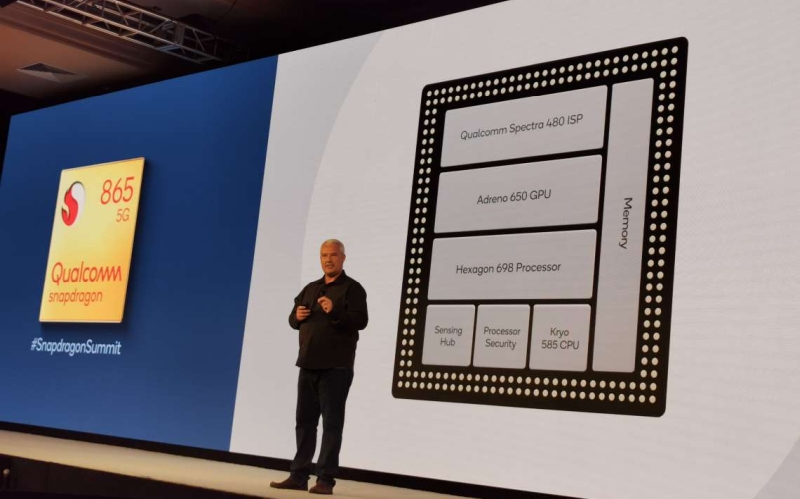 The new Kryo 585 provides a 25 percent faster performance than then predecessor and 25 percent higher power efficiency. Increasing the performance by a quarter on the same 7nm manufacturing node means that in spite of the usual boost one gets optimizing the cores, Qualcomm used newer second-generation 7nm cores, based on the latest Cortex A77.

They are again using the same approach as the last year. The fastest core will run at 2.84GHz while the other three 585 cores will run at a slower 2.4GHz clock but in the same cluster. There will be a Cortex-A55 based low-power-aware (efficiency) Kryo cluster too. As you can see from the diagram below, all cores have their own L2 cache, with 512KB for the Prime CPU core, 256KB for each of the Performance Cortex-A77 cores, and 128KB for Cortex-A55 Efficiency CPU cores, and share 4MB of L3 cache.

The new Snapdragon 865 supports two kinds of memory interfaces, the new LPDDR5 and the LPDDR4x, the one that was supported by this year’s Snapdragon 855. The LPDDR5 memory runs up to 2750MHz and needs lower voltage and obviously has higher throughput. The LPDDR4x memory works up to 2133 MHz. The new mobile powerhouse SoC supports up to 16 GB. This means exactly how it reads, you will see 16GB phones this year, especially the gaming phones. It is arguable if more memory is necessary, but it will happen. 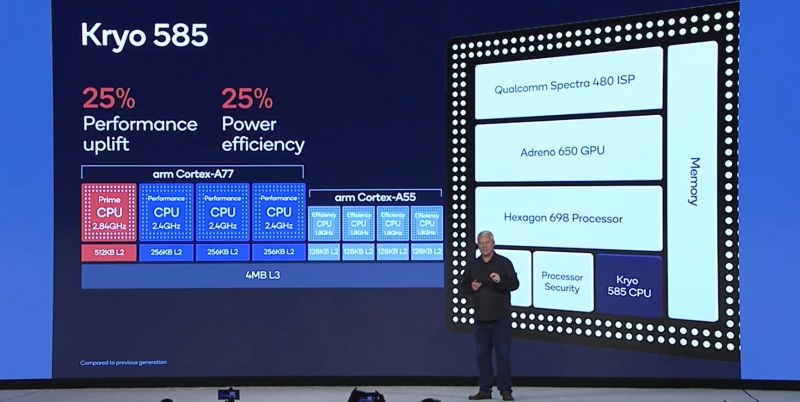 There is a new feature called physically based rendering as well as OpenGL ES 3.2, OpenCL 2.0 FP and Vulkan 1.1 API Support. The GPU has hardware-accelerated H.265 and VP9 decoder and HDR playback codec support for HDR10+, HDR10, HLG, and Dolby Vision.

Camera performance drives the sales of phones and is one of the key features for the manufacturers and obviously Qualcomm had to spend and innovate in this area. The new SoC supports up to 200-megapixel sensors. This translates to, take a picture with the best lens you have on your phone, zoom in and you should still have decent details. So now the Xiaomi 108 megapixel phone doesn’t sound too crazy right now. One clear downside of extremely high-resolution photos is that photos will eat more storage as people are lazy to decrease the size of the photo when not needed.

Qualcomm Spectra 480 Image Signal Processor also brings 8K video support as well as 4K 120 FPS. These things will never stop there will be even higher megapixels and video resolutions in future phones. 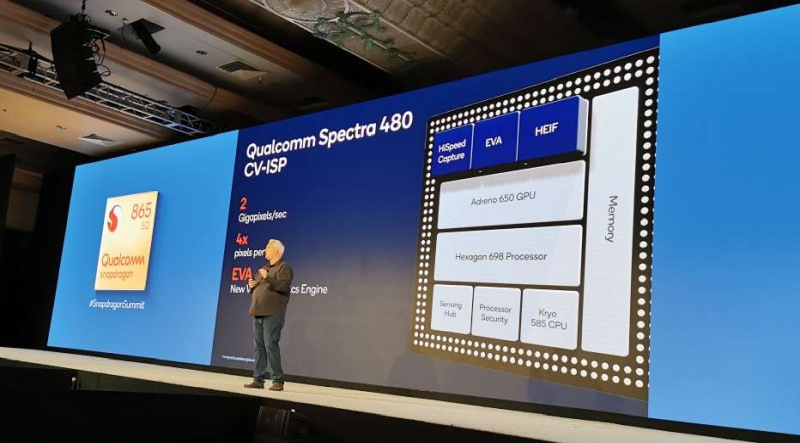 This is a business decision as the world in 2020 will be split between people having 5G coverage and people, countries or regions that won’t. 5G is a great technology but it will be up to the operators/carriers to start implementing and deliver it to your house. Metropolitan areas will and are first.

The Snapdragon 865 has a great Gigabit LTE supporting the X24 modem that will take care of your 4G and Carrier aggregation affairs.

The Snapdragon X55 5G Modem-RF System support speeds up to 7.5Gbps. one can be over the moon even with 1Gbps realistic real-life speeds but 7.5 is much better. The modem supports 5G mmWave and sub-6 GHz, standalone (SA) and non-standalone (NSA) modes, FDD, TDD and fancy features such as Dynamic Spectrum Sharing. It supports mmWave: 800 MHz bandwidth, 8 carriers, 2x2 MIMO as well as Sub-6 GHz: 200 MHz bandwidth including 4x4 MIMO.

The multimode support includes 5G NR, LTE including CBRS, WCDMA, HSPA, TD-SCDMA, CDMA. Qualcomm is well established in Modems and the company is growing importance in RF and filter market too. 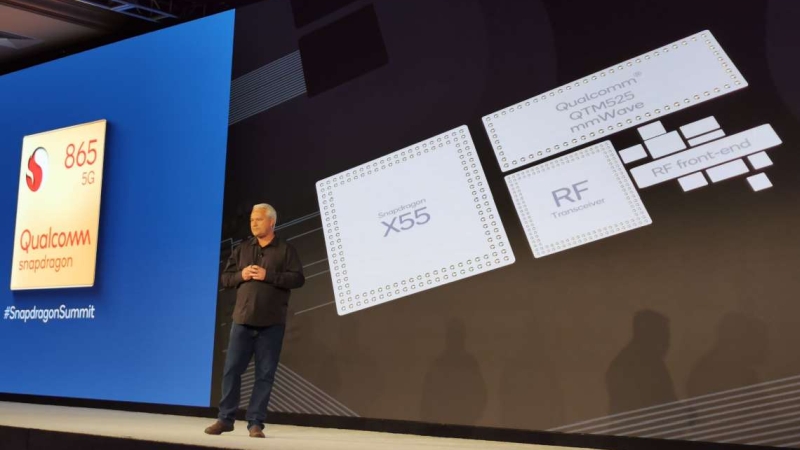 Artificial Intelligence is combining the power of Adreno 650 GPU, Kryo 585 CPU, and the Hexagon 698 Processor. There is a new Hexagon Tensor Accelerator, Hexagon Vector eXtensions as well as the Hexagon Scalar Accelerator features. AI is becoming increasingly important in the Snapdragon SoC as it can save a lot of power and accelerate many tasks.

As noted during the presentation by Ziad Asghar, VP of AI Product Management, the Snapdragon 865 peaks at 15 trillion operations per second (TOPs), which is a significant improvement compared to the Snapdragon 855 and five times higher than the Snapdragon 845 SoC. 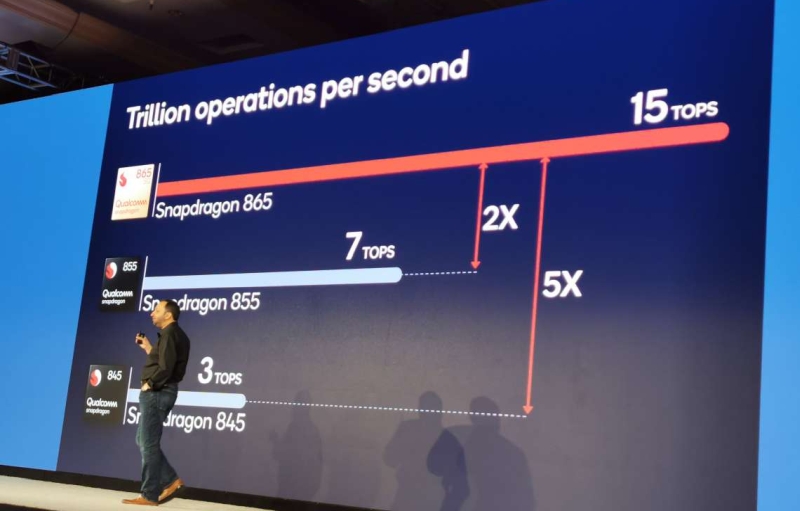 There is support for Quick Charge 4+ and some new Quick Charge AI feature we will learn more about later. Last but not least Snapdragon 865 supports elite gaming features, USB 3.1 and naturally Type-C. Some rumors are true, the part number is SM8250.

Some of all these features is expected in Q1 2020 or early Q4 2020 in the latest Samsung, Xiaomi, OnePlus and many other 4G and 5G enabled phones. Some will come as 5G, some as 4G, depending on the market but this is a decision of the OEM. Overall, the Snapdragon 865 packs more than most need and will help OEM make some impressive phones, and hopefully more and more affordable foldables.