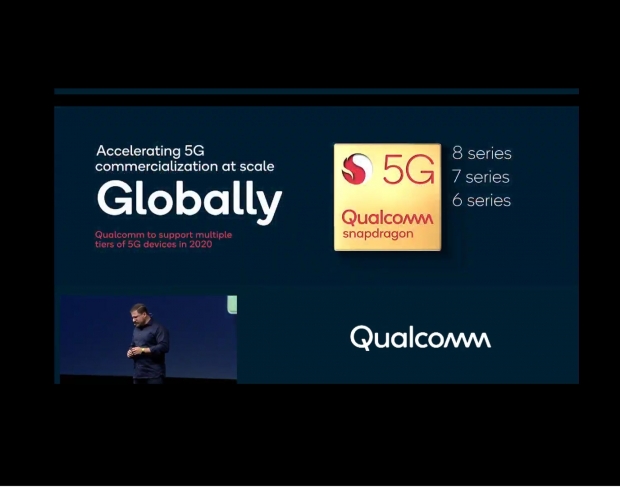 Expanding to three tiers in the early days of 5G is a massive acceleration of 5G deployment as currently over 20 operators and 20 devices are in the market with the X50/Snapdragon 855 combo. Besides, the next-generation Snapdragon 7 series will come with an integrated 5G modem. Integration helps the company reduce both the PCB size and cost of the SoC.

The next generation 8 series Snapdragon is expected to make an appearance at the Snapdragon Technology Summit in December in Hawaii Maui, and  - according to Cristiano, it will have an X55 generation modem. Bear in mind that the Snapdragon X55 uses the 7nm process and supports speeds up to 7Gbps, Stand Alone and Non-Stand-Alone mode and Qualcomm has a good RF portfolio. Let’s not forget millimeter waves, either,  as it turns out that currently Qualcomm is the only company which will support it for smartphones.

Bringing 5G all the way to Snapdragon 600 series mid-tier is a positive wave for the market as, Cristiano said, there will be 2.2 billion people in countries which plan to launch 5G or have already launched it. It is clear that this is a Total Addressable Market (TAM) rather than an exact number, but 5G will scale much faster compared to 4G due to its importance and benefits.

Samsung currently uses Qualcomm’s 5G, and the same is expected from Apple in 2020. Samsung will reportedly have its solution ready and has already announced the Exynos 980 which ought to be ready for mass production by the end of this year. Huawei has 5G exclusively in its highest tier.

The fact that Qualcomm is bringing 5G to other tiers will accelerate deployment and offer better and more attractive pricing. It will reduce the overheads that the first generation 2019 devices had, and make phones cheaper. Every new technology starts at the top and then scales down. No surprise there, we know.

Even two years ago, it was clear that 5G will roll out and accelerate like no other G before. Diversity and concurrence can push things to the next level.

Last modified on 06 September 2019
Rate this item
(1 Vote)
Tagged under
More in this category: « Apple copied developer app ideas Kirin 990 5G and 4G are two separate chips »
back to top