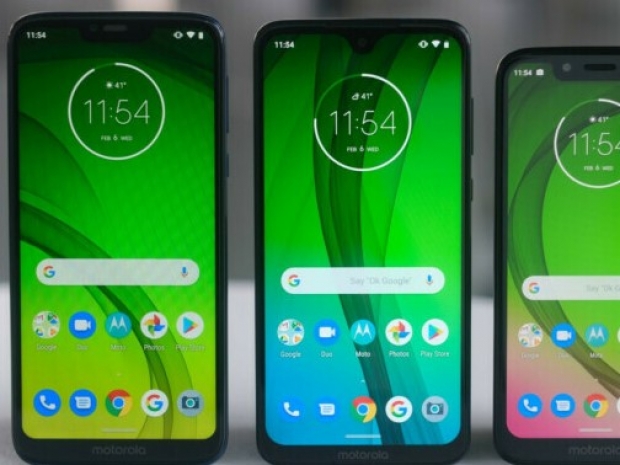 Moto G7 looks rather good for the price

Motorola is releasing three versions of the Moto G7 this year: the G7, the G7 Power, and the G7 Play. A fourth, more powerful G7 Plus model, will also be released internationally. These new devices offer slimmer bezels, bigger displays, and larger batteries than their predecessors.

The $299 G7 will be the top model with a 6.2-inch Gorilla Glass display that features a 2270 x 1080 resolution and a more subtle teardrop notch. The G7 also has 4GB RAM and more internal storage (64GB) than its siblings, along with a dual-camera setup on the back that offers a 12-megapixel main lens along with a 5-megapixel depth sensor for a better portrait mode experience (the other G7 phones will have a software-based portrait mode instead).

The next phone is the $249 G7 Power, may not offer the same level of premium upgrades as the G7, but it does offer an intriguing feature that its pricier counterpart doesn't: a massive 5,000mAh battery that Motorola promises should last for up to three days, besting the 3,000mAh battery in the G7 by a considerable amount - it also supports Motorola's TurboPower charging.

The G7 Power features a 6.2-inch display, but at a lower 1520 x 720 resolution and with a larger notch, and only a single 12-megapixel camera on the back. It also drops down to 3GB of RAM and a base storage of 32GB, and is a bit bulkier than the main G7 -- but if sheer battery life is your goal, it seems like the G7 Power will be tough to beat. Lastly, there's the $199 G7 Play, the smallest and cheapest model in the 2019 Moto G lineup. There are more cuts here: a smaller 5.7-inch 1512 x 720 display with an even larger notch than the G7 Power, a cheaper plastic case, and just 2GB of RAM.

All three devices will feature Qualcomm's mid-tier Snapdragon 632 processor, Android 9.0 Pie, 8-megapixel front-facing cameras, charge via USB-C, and offer rear-mounted fingerprint sensors. Lastly, the 3.5mm headphone jack is still included on all three models. Motorola is promising a release date sometime in the spring for both the US and Canada.

Last modified on 08 February 2019
Rate this item
(0 votes)
Tagged under
More in this category: « Essential PH2 may have a camera behind the display Apple is making its own modem »
back to top