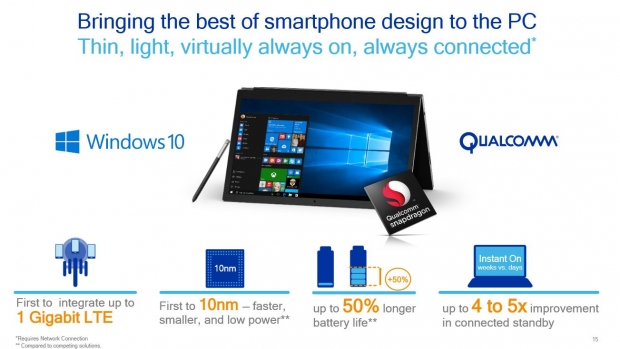 We had a chance to ask Erin Chappelle,  General Manager of the Windows and Device group of Microsoft, and lead player of Windows 10 on Snapdragon about the lack of 64-bit emulation support at launch.

She was the right person to ask why Windows 10 on Snapdragon is missing  64-bit emulation application support. She also leads the team delivering the base components of the operating system including the Kernel, Hypervisor, Containers and Storage and was certainly the right person to address this "elephant in the room".

64 Bit on ARM in the future

Erin confirmed to Fudzilla that Microsoft is considering 64-bit emulation support in the future, but it was a time to market and executive decision that prevented 64-bit being supported at launch. Microsoft will enable 64-bit SDK for developers and this might be the way to optimize the applications in the future. Our understanding is that if Adobe comes up with an idea that it wants to make a native Photoshop for ARM, Microsoft and its SDK will be there to help.

Erin also said that most X64 applications in the market are high end games. This is not what the Snapdragon platform is tailored for. At the Snapdragon technology summit in beautiful Maui, Hawaii, it was pointed out by Erin as well as Terry Myerson, executive vice president of the Windows and Devices Group at Microsoft, that the always connected PC is a completely new market for Microsoft.

Of course Microsoft sees potential here,  as the company has invested a lot of time and resources into the Windows on Snapdragon, always connected PC project. The motivation is very straightforward. Microsoft wants to get into new markets as it realizes that people need the connectivity on modern devices.

HP Envy X2 device comes with 4GB or RAM while Asus NovaGo always connected Snapdragon 835 device comes with up to 8GB memory. While the OS can support 8GB of memory, applications will be limited to 4GB. This might become a problem in some extreme scenarios - but both Qualcomm and Microsoft pointed out that these devices are targeting the casual, every day user market, rather than high end video editing professionals.

You start with a market where you have a good value proposition and in this case this was the consumer market. In the future, Microsoft hopes to bring always connected PC ideas to the enterprise, which will benefit from the security and cloud opportunities for mobility that 4G and 5G offer for enterprises.

Snapdragon 835 devices are, it seems the first of many to come. There is an opportunity for higher as well as lower cost devices. This is what Miguel Nunes, Director of Product management for Windows on Snapdragon and Erin Chapple left us with.

Last modified on 06 December 2017
Rate this item
(0 votes)
Tagged under
More in this category: « Qualcomm expects 5G in 1H 2019 Google Go might make cheap phones better »
back to top