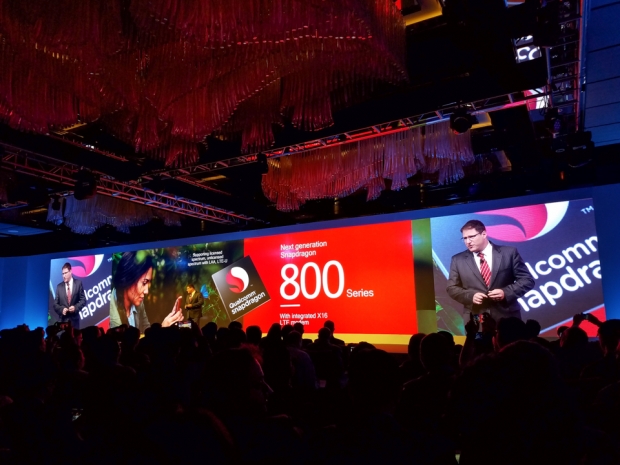 This is not a big surprise, as Qualcomm has played this game before. The Snapdragon 820 has the Snapdragon X12 modem, capable of 600 Mbps downloads and 150 Mbps uploads, while Snapdragon X16 was launched as a standalone solution.

Now, the X16 is going to be incorporated in Snapdragon 830, or the “next-generation 800” as Christiano calls it. We strongly believe that the next-generation Snapdragon lineup is going to be announced before the end of the year and the chips should be announced in the first high-end phones by Mobile World Congress 2017 around February 26 - 27 2017.

Yes, we would be very surprised if the Galaxy 8 doesn’t come with the next generation of Snapdragon as well as with its own Exynos SoC. Christiano was also proud to announce that Telstra in Australia is the first company to deploy a Netgear-based Snapdragon X16 gigabit device. Ericsson did the network component and Australian residents are once again the first to experience these rather incredible speeds.

Christiano said that in  field testing they have seen that average speeds on the gigabit-class Snapdragon X16 increased from 100 to 307 Mbps, which is quite a jump compared to the current speeds.

In Vienna, Austria we have seen speeds up to 102 Mbps on 300 Mbps capable Cat 6 networks, with average speeds of 60 Mbps. On the previous generation MDM9625 Cat 4 modem in the iPhone 6, we are getting speeds around 15Mbps to 40Mbps in Orange County, California. Clearly, the speeds that Cristiano mentioned are higher than that. The future will get you a faster internet on the phone, there is absolutely no doubt about it, and trust me you are going to need it.