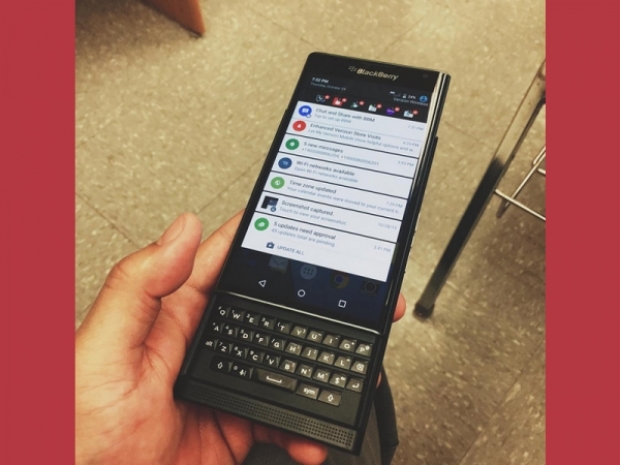 A load of leaking toilet

The photo shows a Verizon version of the phone and was posted on the Instagram account of user apertura64.

The BlackBerry Priv was formally known as Venice which is quite appropriate given that the medieval trade empire is long out of fashion and is sinking.

Blackberry fans are sceptical as the photo could be forged, but if it is, then the Verizon detail on the phone’s screens are a nice touch.

However Verizon-related have a long history of being untrue. In 2014, sources indicated that Sony Xperia Z2 would end up with the company and it wasn’t.

Still Verizon was named as one of the telcos who would be flogging the BlackBerry Priv, although none of them have made any official announcement that they will be going near the Priv with a barge-pole.

BlackBerry, on the other hand, will start to answer orders and ship the unlocked phone beginning the week of November 9. Due to the different GSM and CDMA mobile systems, American buyers of the unlocked devices may only use them on T-Mobile or AT&T.

Its configuration, which shows a Snapdragon 808 processor with 3 GB RAM. The storage standard is 32 GB, but microSD expansion may push it to 2 TB. High tech features come from the Quick Charge 2.0 capacity, wireless charging support (Qi and PMA are both possible) for its 3,410mAh battery. The screen is a curved 5.43-inch, WQHD Plastic AMOLED that supports a resolution of 2,560 x 1,440p. The Gorilla Glass 4 ensures durability to the portrait sliding smartphone.

However the price is silly – $699 and looking at the picture it is big and ugly .

Last modified on 02 November 2015
Rate this item
(5 votes)
Tagged under
More in this category: « OnePlus X will need invites Tablet venders try to get specific »
back to top