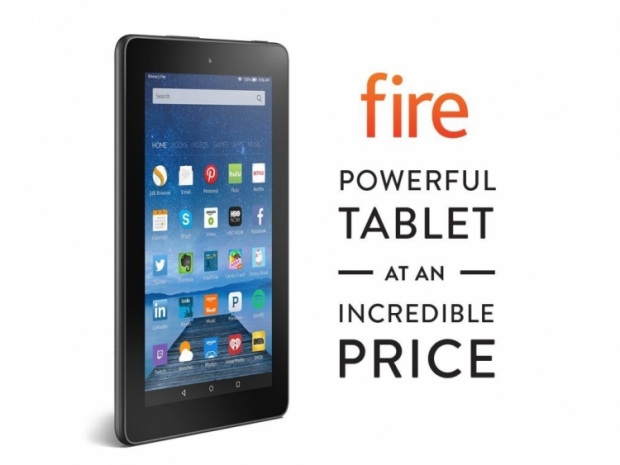 The latest Amazon Fire tablet and console update is powered by various MediaTek chips and the 7invh $49 / 59 Euro peaked our interest the most.

Amazon's Fire 7 in Europe costs more in Europe thanks to VAT and because they can.

It is hard to make a purchase decision without knowing the SoC inside. Just having a 1.3 GHz quad core processor doesn’t tell you anything any more and comparying things with a high end tablet is always a hiding to no-where.

The Amazon fire 7 tablet has a 1024x600 screen and it doesn’t have the latest or greatest Snapdragon 810 or MediaTek Helios X10 processor inside. Instead it comes with a MediaTek MT8127 D processor whic has four A7 cores. MediaTek has launched this processor in May last year and the company thinks that this is the best solution for the Super-mid-market tablet. The MT8127 has an ARM Mali-450 MP4 GPU that is capable of low-power, Full HD 1080p video playback and recording. It supports 13 megapixel camera and Miracast. This inexpensive tablet chip can also offer HEVC (H.265) video playback. All this made its way into Amazon's  $49 tablet.

Of course this is subsidised tablet with an add supported business model. A tablet without the ads will cost $15 more. The Chinese SoC company Allwinner can ship a SoC for $60 tablet and make a profit at $4 a SoC. This is really inexpensive and companies like Rockchip a lot latey.  It even  started working closely with Intel.

Still $49 for subsidised tablet of $249 for six devices in a six pack package is a great deal. It will bring tablets to people who could not/ didn’t want them before. You can get decent tablets from Chinese manufactures for the similar money, but these can be hit and miss , and the quality and the customer support is not at the same as Amazon's. Chromecast sold well as it was inexpensive. it now sells for $38.33 while the Fire TV stick sells for $39.99. For some $10 more you can get the full tablet.

We don’t know how much MediaTek can make out of the MT8127 SoC but if you sell this product in millions, it can bring some decent revenue to the tablet group.

Obviously the SOc inside of the more expensive Fire HD 10 inch and Fire HD 8 inch is the MediaTek MT8135, a quad core two A15 at 1.5GHz and two A7 cores at 1.2GHz. This is not a ground breaking tablet SoC but again it can do the job.

Amazon Fire HDX 8.9 inch is powered with Qualcomm Snapdragon 805 at 2.5GHz and has much better 2560px x 1600px but it also sells for $399. The 10 inch Fire HD 10 is selling for $229.99. Amazon realized that not to many people want to pay for iPad prices for the tablet. Since 95 percent of Fire HD customers have no idea what Qualcomm, MediaTek or SoC is, Amazon will most likely be fine and could make the 2015 refreshed tablets as the most successful to date. After all, the price is right.

Last modified on 21 September 2015
Rate this item
(0 votes)
Tagged under
More in this category: « Amazon Fire TV 2015 is a huge win for MediaTek Telcos sell Apple watch on Friday »
back to top