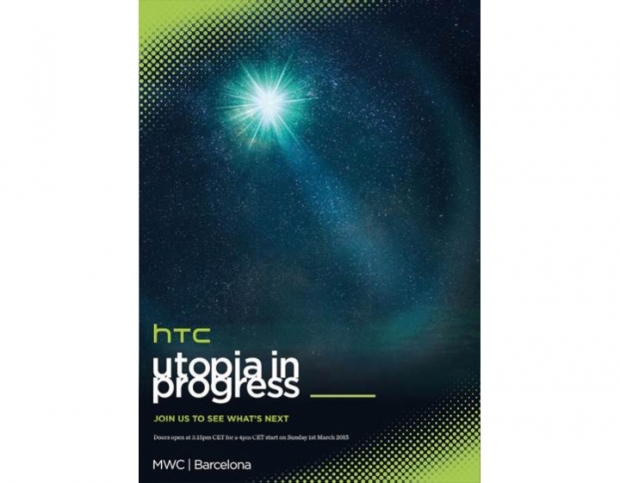 Few weeks away to the new One

HTC has sent out invitations for the Mobile World Congress event where we all expect to see the new HTC One M9 high end device.

There will be a lot of announcements at the Barcelona-based Mobile World Congress (MWC 2015) and we expect to see new devices from Samsung, LG and many other brands.

HTC didn’t actually say that they want to release a high end phone at the event, they simply said an event named Utopia is in progress, and called on fans to "join us to see what's next".

We have mentioned the phone, codenamed Hima, a couple of times, as it is expected that the successor of HTC One M8 comes. The device is apparently 144.3 x 69.4 x 9.56mm with a 5-inch Full HD display and 3GB of RAM. This means the new high end will end up with a similar size to the current flagship.

Furthermore it is expected that the new phone comes with a Snapdragon 810 2.0GHz quad-core + 1.5GHz quad-core processor that is going to end up in most high end phones to come in early 2015. We expect that the Galaxy S6, LG G4, the new Sony Xperia will all end up with the Snapdragon 810.

HTC Hima should also come with a 20.7-megapixel camera, as well as a 13-megapixel or 4-megapixel UltraPixel front facing camera. This is going to be the biggest change from the current HTC One M8. The last leaked information is the 2840mAh battery as well as Android 5.0 Lollipop with HTC’s new Sense 7.0 user interface, but you could have guessed this one.

We also expect to see a new mainstream phone the one that might give the Moto G run for its money.