Back at CES we met up with Lucid, a company that showed us GameExtend technology that is inside the big Samsung Galaxy Note 3. This was a major design win for Lucid and many will recognize the name from PC gaming, as it’s the same company that developed the MVP chip.

NavExtend demo was showed and filed running the same demo on two Samsung Galaxy Note 3 devices where one of them had the NavExtend disabled and other enabled. It turns out that the one that has the technology enabled was using on average 30 percent less power than the phone with Lucid optimization enabled.

You would not tell the difference if they would both running the same demo and Lucid explained us that they managed to save that much power simply by getting rid of unnecessary frames that are not necessary to be refreshed at some high rate. The end result would be the same for the end user and 30 percent less power consumption can mean saving up to 45 percent in the battery life. Since GPS is already killing a lot of your battery, you can use all the help you can possibly get and we see NavExtend as very useful feature.

Lucid views navigation as s very slow game that is very predictive, leaving a lot of space for optimizations. It also confirmed that top navigations got supported out of the box for all Samsung devices including Galaxy Note 3 and future phones so you don’t have to worry if your favorite application will get support. You can see the short demo with the actual power numbers below. 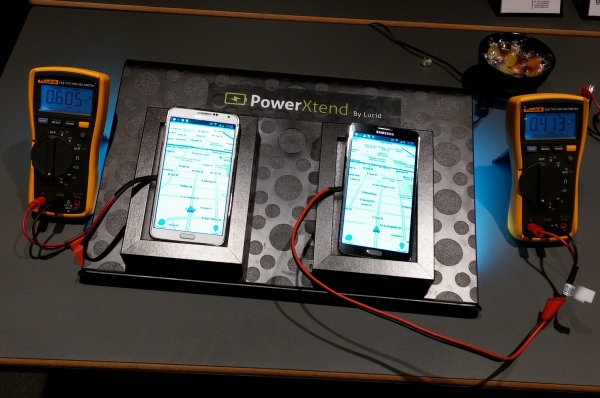 Check out the video after the break.

More in this category: « Samsung Galaxy S5 has Lucid Xtend Intel to get its SoC to Motorola phones »
back to top