HTC One Mini coming to UK next month

To cost £380 without contract

Most UK carriers have lined up to announce its plans regarding the recently announced HTC One Mini and judging by Tweets and official announcements, UK carriers will get the One Mini in August, ahead of its planned global September launch.

In case you missed it yesterday, the HTC One Mini features a 4.3-inch SLCD3 display with a resolution of 1280x720, polycarbonate body with an aluminium back cover and is powered by Qualcomm’s dual-core Snapdragon 400 clocked at 1.4GHz, Adreno 305 GPU, 1GB of RAM and 16GB of internal non-expandable storage. It runs on Android 4.2.2 OS with a dash of HTC Sense 5 and features the same Ultrapixel camera seen on the bigger HTC One.

The UK O2 tweeted that HTC One Mini is coming soon and although it did not give any specific details, Carphone Warehouse revealed that it will be cost £380 without contract and start at £27 a month in case you go for a 2-year contract on O2.

The MobileFun site lists the SIM-free HTC One Mini at €445 which pretty much translates to the same amount of Her Majesty's currency, while Vodafone made a blog post saying that One Mini will be available in August at a yet to be revealed price.

EE will also have it and might be the most interesting one due to its 4G LTE support but did not announce any details regarding the availability date or the price.

You can check out more details at Pocket-lint.com. 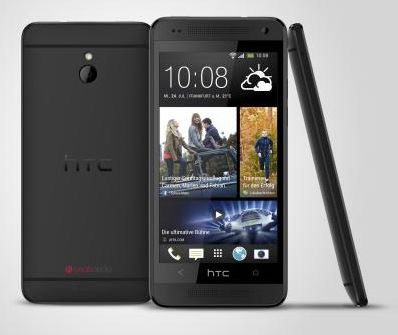 Last modified on 19 July 2013
Rate this item
(0 votes)
Tagged under
More in this category: « HTC One Mini is official, no word on price Blackberry takes your email details »
back to top