The guys from Heise.de managed to get their hands on an updated Nvidia roadmap shown during the Citi Technology Conference that has two new SoC chips that weren't there before, the Kal-El+ and Grey.

Although the precise details regarding these two chips are still unknown, there has been quite a few good educated guesses. Since Nvidia plans to get a piece of notebook space once Windows 8 comes out it is logical to assume that Kal-El+ might just be a chip for it. The Kal-El+ is scheduled to show up sometimes in mid-2012 and be a chip that should hold Tegra afloat 'till Wayne arrives, sometimes in the end of 2012.

The second new chip is the Grey, a Tegra+Icera SoC chip that, according to the roadmap, targets mostly smartphone market. It will most likely be made using 28nm manufacturing process and will feature 2G/3G/4G communication capabilities, something that Tegra has been lacking. Of course, Grey SoC comes in 2013, and could end up to be a cut down version of the Wayne chip in order to accommodate the cheaper smartphone market. 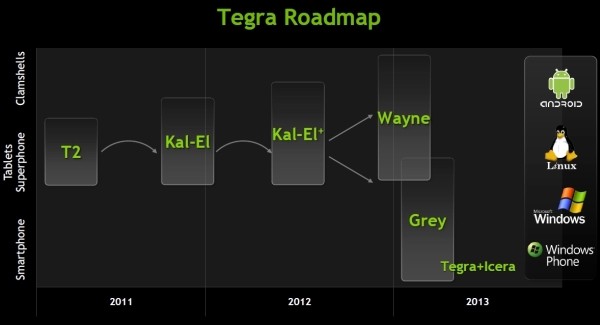 Last modified on 11 September 2011
Rate this item
(1 Vote)
Tagged under
More in this category: « Next iPhone to be “thinner and lighter” Microsoft wants $15 per Android phone »
back to top