Next generation phones getting LPDDR4 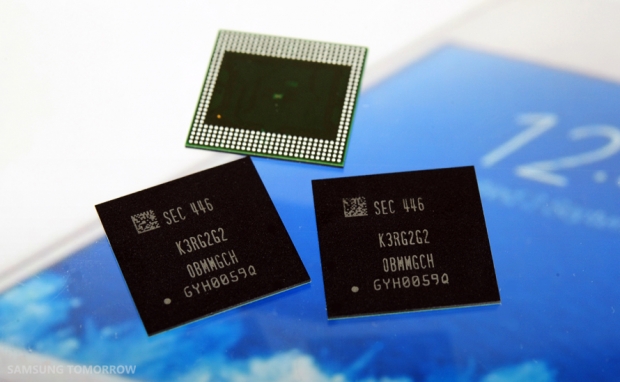 Most mainstream to high end phones are powered by LPDDR3 memory and this includes the latest iPhone, Samsung Note or Galaxy, LG G3 or HTC One M8 phones among others.

The future, or early 2015 to be more precise, brings the LPDDR4 a next generation mobile DRAM standard. LPDDR4 launches with an I/O data rate of 3200 MT/s and a target speed of 4266 MT/s, compared to 2133 MT/s for LPDDR3. It also operates with 1.1V, a 10 percent lower voltage compared to 1.2 with LPDDR3. The LPDDR4 standard is very fresh as JEDEC (Joint Electron Device Engineering Council) has announced the final specification on August 25th 2014. In case you are not familiar with the term, JEDEC is an independent semiconductor engineering trade organization and standardization body.

Samsung has managed to double the clock rate from the current 800 MHz with LPDDR3 to 1600MHz with LPDDR4, increasing the total memory bandwidth from 12.8GB/s with LPDDR3 to 25.6 GB/s DRAMeXchange expects that one percent of Samsung market share in DDR memory will be LPDDR4, but in a year's time, in Q4 2015, DRAMeXchange expects that Samsung's LPDDR4 market share could expand to 30 percent of total LPDDR4 supplies.

SK Hynix, another big name in the DDR industry, expects to grow from the current 1 percent to 18 percent in a year. US based Micron has not yet entered the LPDDR4 market but it is expected that the company can capture a good 25 percent of it in Q4 2015. Qualcomm has officially confirmed that its 2015 flagship Snapdragon 810 supports LPDDR4 1600MHz Dual-channel 64-bit (25.6GBps) memory and we expect that a lot of top brands in the phone industry based their high end phones on this chip. Have in mind that only the Snapdragon 810 supports LPDDR4 while Snapdragon 808, 805, 801 and a bit older 800 are stuck with the LPDDR3.

Qualcomm is also the first company to introduce working LPDDR4 hardware, in the form of its Snapdragon 810 engineering platforms.

We expect Nvidia Erista to feature LPDDR4 support, while Mediatek and Intel will probably announce its LPDDR4 SoCs next year. No word on Apple's next generation SoC, but Apple does not tend to be behind the curve, so we would be surprised if it did not go LPDDR4 next year, too.