Mother of all memory cards

SanDisk has launched the world’s first 128GB microSDXC card. It is a UHS-I card and the company says it is the biggest memory card for mobile devices, at least for the time being.

“The new SanDisk Ultra microSDXC card again demonstrates how SanDisk continues to expand the possibilities of storage so that consumers can benefit from our latest technology advancements,” said Susan Park, director, retail product marketing, SanDisk. “With 128GB of removable storage, consumers will enjoy the freedom to capture and save whatever they want on a smartphone or tablet, without worrying about running out of storage space.”

To enable 128GB of storage on a removable microSD card, SanDisk developed an innovative proprietary technique that allows for 16 memory die to be vertically stacked, the company said.

However, SanDisk isn’t saying much about performance. Being a UHS-I card, the max transfer speed should be anywhere as high as 50MB/s to 100MB/s, but we don’t have the exact figure. SanDisk says the Ultra microSDXC card delivers twice the speed of ordinary microSD memory cards, but when it says “ordinary” cards it is talking about cards with up to 5MB/s write speed.

Needless to say, getting 128GB of storage in a fingernail form factor doesn’t come cheap. The card is priced at $199. 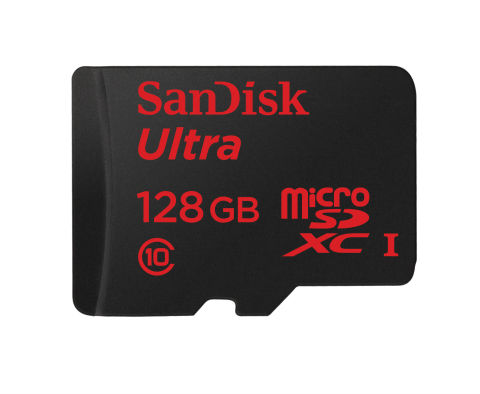