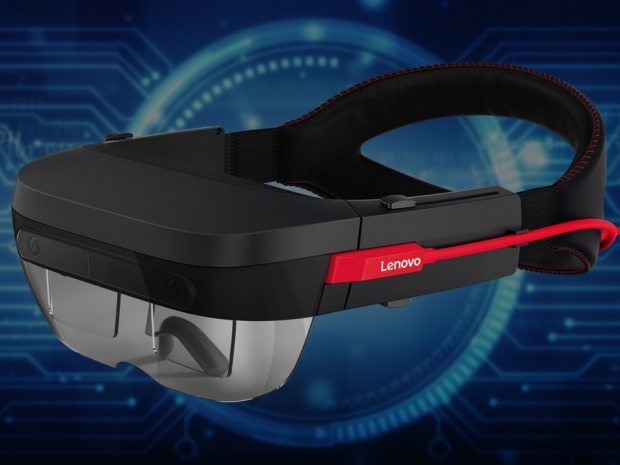 Lenovo is launching a new AR-and-VR system targeted at businesses.

Dubbed ThinkReality, and from the looks and description of the device and platform, it looks like a competitor for Microsoft's HoloLens.

The new ThinkReality system is based around an AR headset and a software platform. Lenovo said that the ThinkReality A6 is a comfortable 380-gram headset with two fisheye cameras on the front and depth sensors and a 13-megapixel RGB sensor.

There are onboard microphones for voice control, and the headset can detect where you're gazing to optimise resolution or navigation.

Punters can interact with your virtual environments using an included 3DoF controller. Untethered, the A6 can last up to four hours with its 6,800mAh battery, and you can still use the device while it's plugged in and charging.

The headset connects to an SSD-sized compute box that contains a Snapdragon 845 CPU running Android. There's also an Intel Movidius chips powering waveguide optics.  Each eye gets a 40-degree diagonal field of view and 1080p resolution.

Microsoft’s HoloLens 2 uses a Snapdragon 850 CPU and packs two 2K MEMS displays. Microsoft also squeeses all the computing components into the headset rather than in a separate box like Lenovo does.

So while you have to lug around a small box, the headset is lighter.

Last modified on 15 May 2019
Rate this item
(0 votes)
Tagged under
More in this category: « Toyota and Panasonic set up company for 'connected' homes Why isn't HTC distributing its new VR to the US? »
back to top