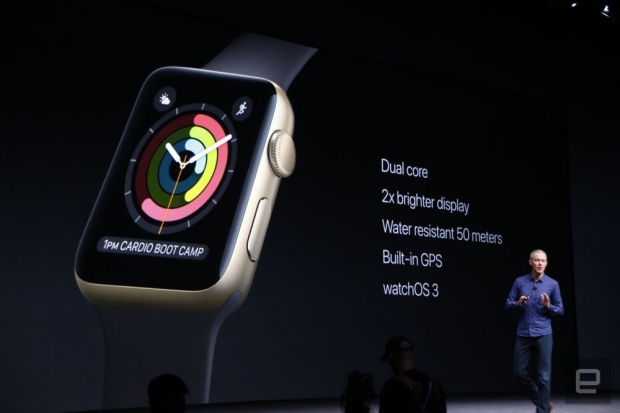 IDC confirms what we have been saying for years

The Tame Apple Press’s efforts at plugging the iWatch for a couple of years have been next to near useless. According to the latest figures no one really wants one.

Beancounters at IDC have been adding up some numbers and dividing by their mother’s maiden name and reached the conclusion that smartwatch numbers are falling faster than the British pound.

IDC says that smartwatch shipments are down 51.6 percent year-over-year for the third quarter of 2016. The fruity cargo cult itself, which was supposed to sell trillions of the devices saw its shipments fall 71.6 percent.

Jobs' Mob has 41.3 percent of the market but only managed to sell 1.1 million Apple Watches in Q3 2016, compared with 3.9 million in 2015. Given that Apple was predicted to sell 60 million a year of the things, according to the Tame Apple Press, this figure is a bit of a joke.

In fact, the only outfit which is doing well out of smartwatches is Garmin which saw its sales increase 324 percent, catapulting it to second-place among vendors. But Garmin’s watches are focused on health and fitness, two areas smartwatch owners actually want.

IDC thinks the fall in smarwatches was due to a lack of hardware. Apple and Pebble’s new watches didn’t hit the market until late Q3, and Google has delayed Android Wear 2.0 until next year, leaving many customers waiting for new gear.

What is more likely is that people can’t justify buying a smartwatch.

Jitesh Ubrani, a senior research analyst for IDC Mobile Device Trackers said it is obvious that smartwatches are not for everyone.

“Having a clear purpose and use case is paramount, hence many vendors are focusing on fitness due to its simplicity. However, moving forward, differentiating the experience of a smartwatch from the smartphone will be key and we’re starting to see early signs of this as cellular integration is rising and as the commercial audience begins to pilot these devices,” he wrote

Last modified on 25 October 2016
Rate this item
(3 votes)
Tagged under
More in this category: « Homeland security looks at Internet of Things Intel shows off 14 nm IoT Atoms »
back to top