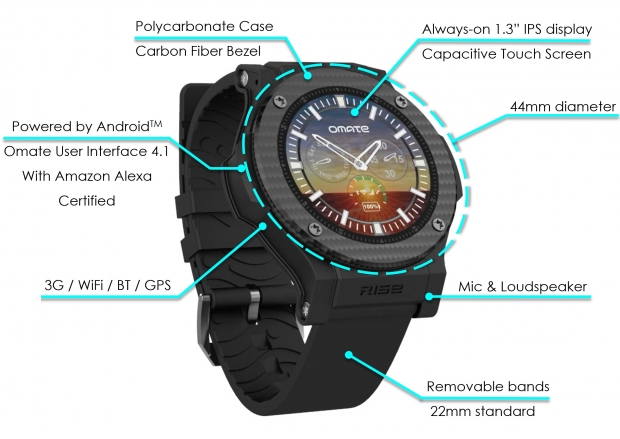 While the fruity cargo cult Apple is about to release a watch which pretty much does nothing, Omate has created one with the Amazon Alexa Voice Service on board.

Omate Rise Limited Edition smartwatch will be in the shops later this year and will be available for pre-order from tomorrow on the Omate Rise Indiegogo page for $199. It will start shipping in December 2016. After January 2017, the price will riaw to $349.

The Omate Rise Carbon Fiber Limited Edition with Amazon Alexa will feature a number engraved on the nano SIM card back plate from 001 to 999.

Additionally, backers of the Omate Rise Beta Tester Edition will receive access to the Amazon Alexa Service via a firmware over-the-air update by the end of the year. Omate Rise early backers have so far contributed over $240,000 in just two days on Indiegogo.

The watch will learn 2,000 skills and can gain access to a myriad of information and control their smart home devices.

Laurent Le Pen, CEO at Omate said: “It has been a fantastic experience working with the Amazon Alexa team to bring Omate supporters voice-experiences through the Alexa Voice Service. “

Aaron Brown, Director of Amazon Alexa said that the Alexa Voice Service was designed so companies like Omate could bring their customers truly magical voice-experiences.

“We’re excited to see customers communicating with Alexa while on-the-go through Omate Rise later this year.”

The standalone Omate app with Amazon Alexa requires that you have a valid Amazon account for sign in and for accessing the Alexa Voice Services. You can asking Alexa questions and get a response, controlling home automation devices and accessing various Alexa Skills including news.

It does not require to say “Alexa” before asking a question. Just press, hold, talk and release. You can enable skills via the Alexa web platform: Omate has partnered with Ting to include a FREE Ting GSM SIM card with the Rise Limited Edition with Amazon Alexa.

Last modified on 30 August 2016
Rate this item
(0 votes)
Tagged under
More in this category: « Fossil sexy Android wear available Asus moves to round watch design with Zenwatch 3 »
back to top