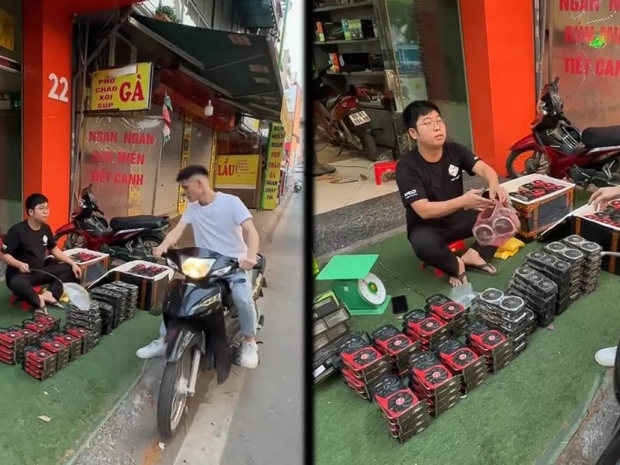 Selling GPU's by the pound

Self-proclaimed 'King of VGA' Vietnam's Lê Thành told his Facebook chums that the store has started to use street trader tactics to grab passersby and sell them GPUs by the pound.

Lê Thành shared pictures of dozens of used GPUs stacked up on the curbside in a clear parody of a Vietnamese street food stall. There is also a video with the vendor patiently waving away flies with a net, awaiting passersby. Then, a scooter stops, and the rider buys a bundle of GPUs after the seller weighs them, then drives off with them in a flimsy red takeaway bag. Other photos show the street seller waving used GPUs at scooter riders in the street. There are stacks and stacks of GPUs shown in Lê Thành's shop, with all the major brands represented.

It is not clear how serious the pictures are supposed to be. Graphics card oversupply in the post-Ethereum GPU mining era has been widely reported and consumer graphics card prices have fallen as the crypto business was running out of steam.

Widespread ending of pandemic-related lockdowns didn't do consumer electronic sales any favours, as did the squeeze on disposable income due to rising energy prices.

Last modified on 31 October 2022
Rate this item
(2 votes)
Tagged under
More in this category: « AMD confirms Radeon RX 7000 series will not use the 12VHPWR connector Nvidia's flaming RTX 4090 GPU might be a wire problem »
back to top