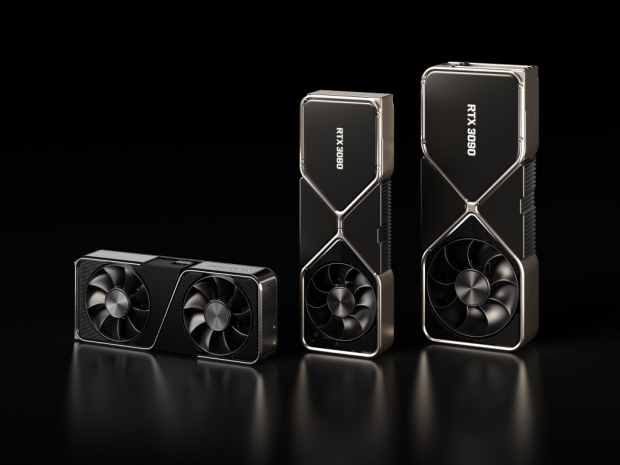 Nvidia has officially announced its RTX 30 series lineup, with three SKUs, the RTX 3090, RTX 3080, and the RTX 3070. Calling it the 2nd generation RTX, all the cards are based on Nvidia Ampere architecture and built using Samsung's 8N custom process.

2nd generation RTX is made at Samsung and brings 1.9x performance per Watt

According to Nvidia, the new Ampere architecture is based on Samsung's 8N Nvidia Custom Process, and while it might not be the first time Nvidia used Samsung (Pascal-based entry-level GTX 10 series), this is the first time Samsung made high-end flagship gaming GPUs. Nvidia said the Ampere packs 28 billion transistors and has 30 Shader-TFLOPS, 58 RT-TFLOPs, and 238 Tensor-TFLOPS in terms of raw performance. 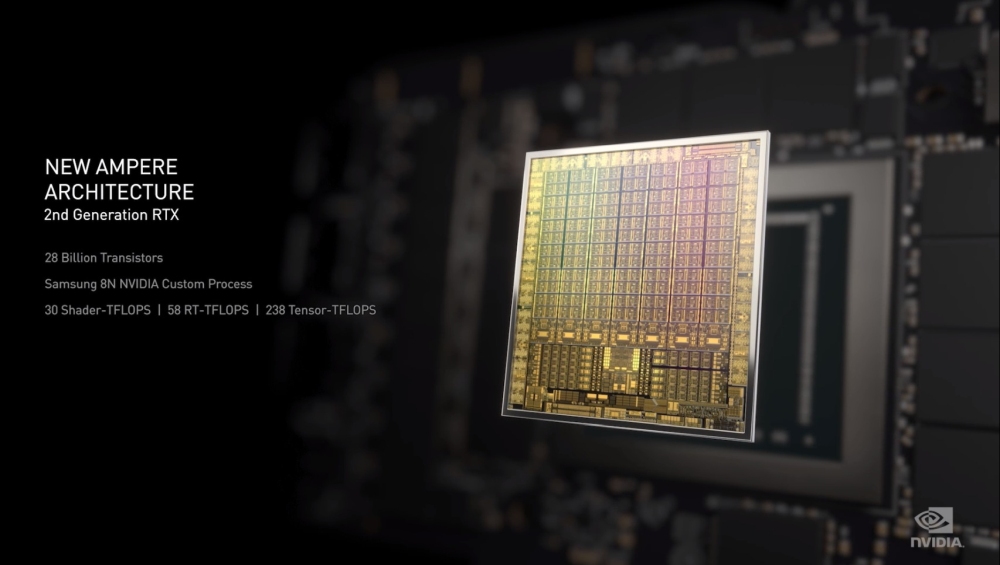 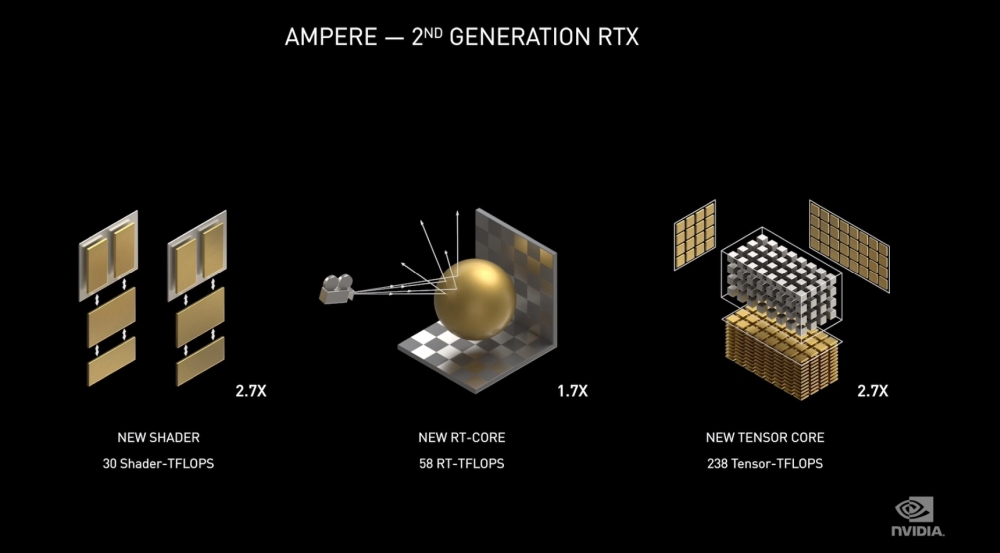 All of this comes thanks to updated shaders, RT cores, and tensor cores. According to Nvidia, Ampere has a 1.9x higher performance per Watt compared to Turing GPU. The 2nd generation RT cores bring 2x ray/triangle intersection and can run concurrent RT+graphics as well as concurrent RT+compute, bringing significant RT performance in games and applications, of up to 2x. 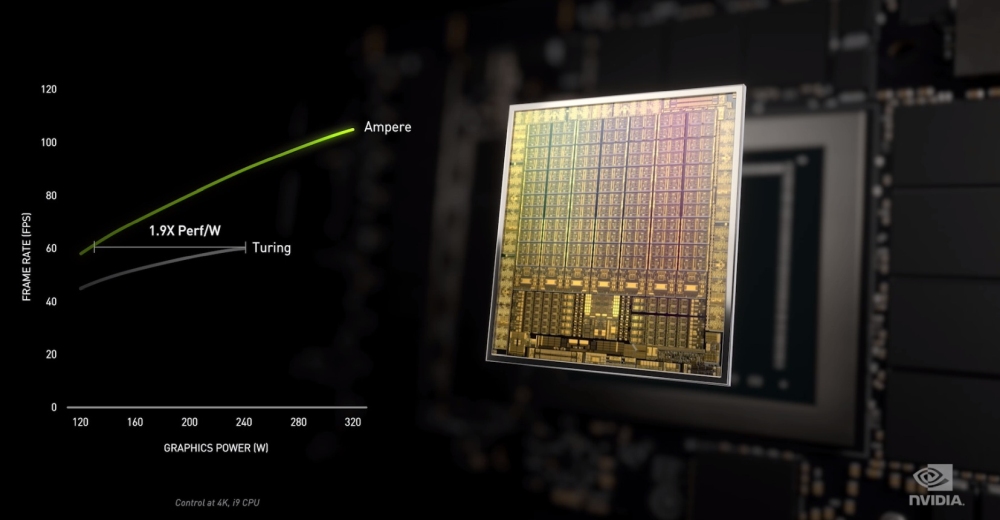 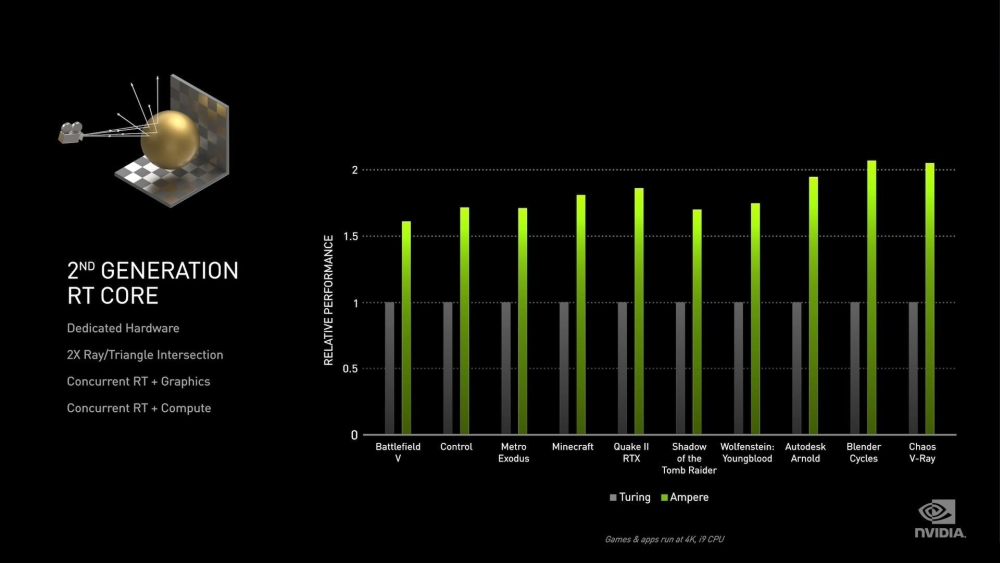 Nvidia's CEO and founder, Jensen Huang, compared the new RTX 3090 with the RTX Titan, suggesting that this is a special card. The BFGPU, as it is called by Nvidia, the Geforce RTX 3090 brings 36 shader-TFLOPs, 69 RT-TFLOPs, and 285 tensor-TFLOPS of performance and comes with 24GB of GDDR6X memory. It starts at an eye-watering $1,499 and will be available on September 24th.

Nvidia was keen to call it "the world's first 8K gaming GPU" and has invited some streamers to show it off on an LG 8K OLED screen. It can run games at 8K with RTX On and DLSS. It also has HDMI 2.1 and AV1 decode support. 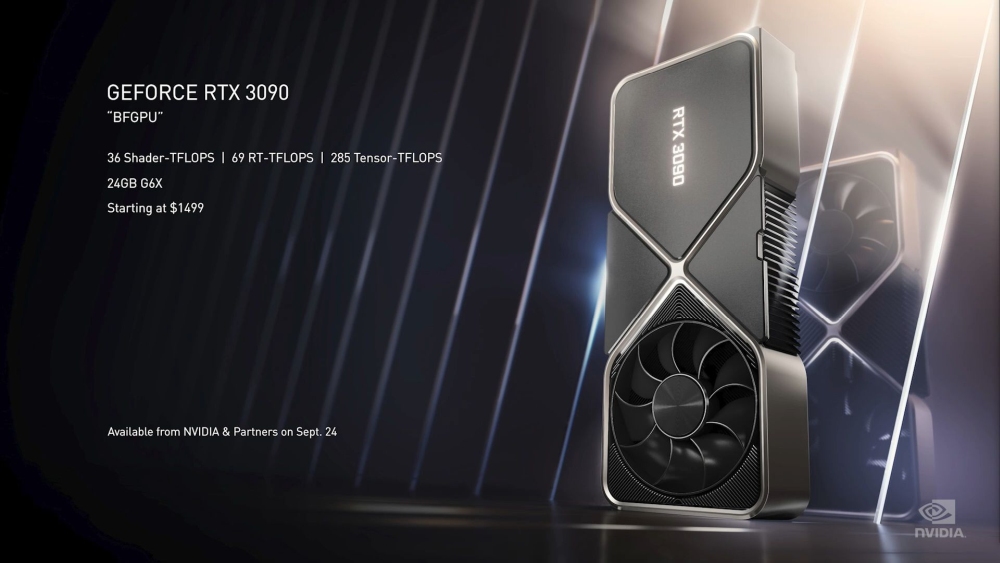 Nvidia is calling its new RTX 30 series the greatest generational leap, and according to Nvidia's performance graph, it does provide an exceptional performance gain while maintaining the same price point, which is a big surprise. 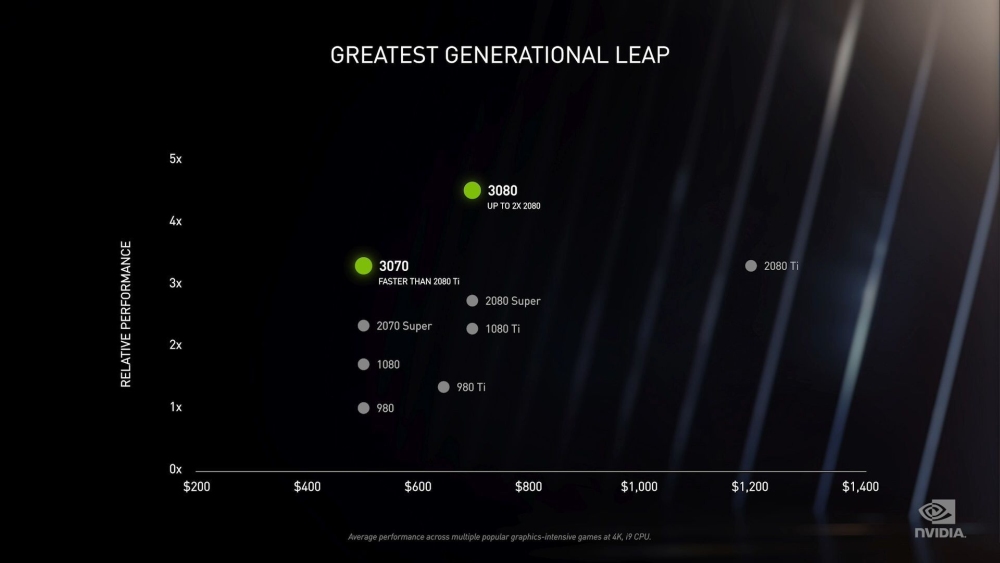 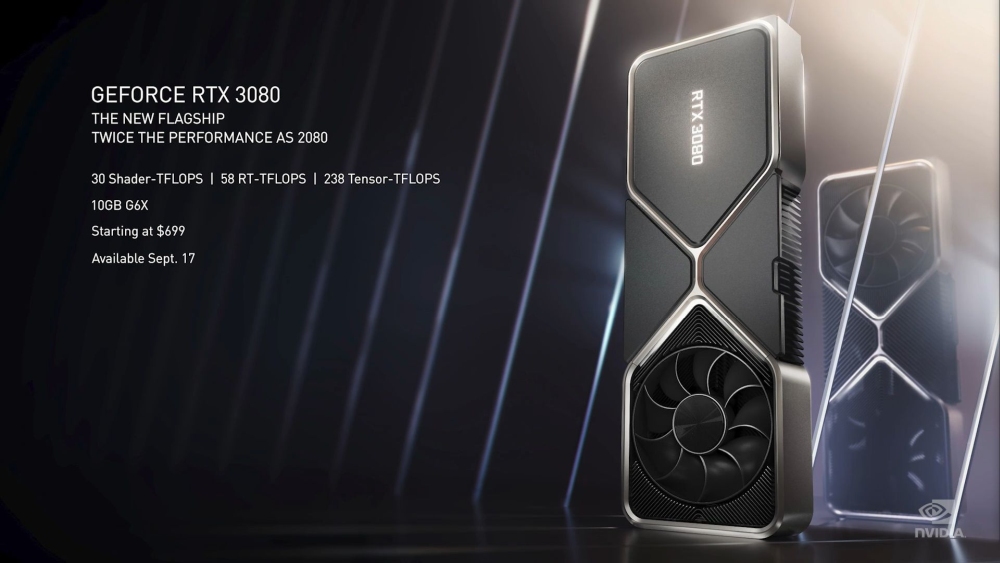 Nvidia was keen to brag about the new G6X, as the world's fastest graphics memory, and in case you missed details provided by Micron, you get 4-level PAM4 signaling, which means 2x more possible values per cycle. It also brings 250mV voltage steps. 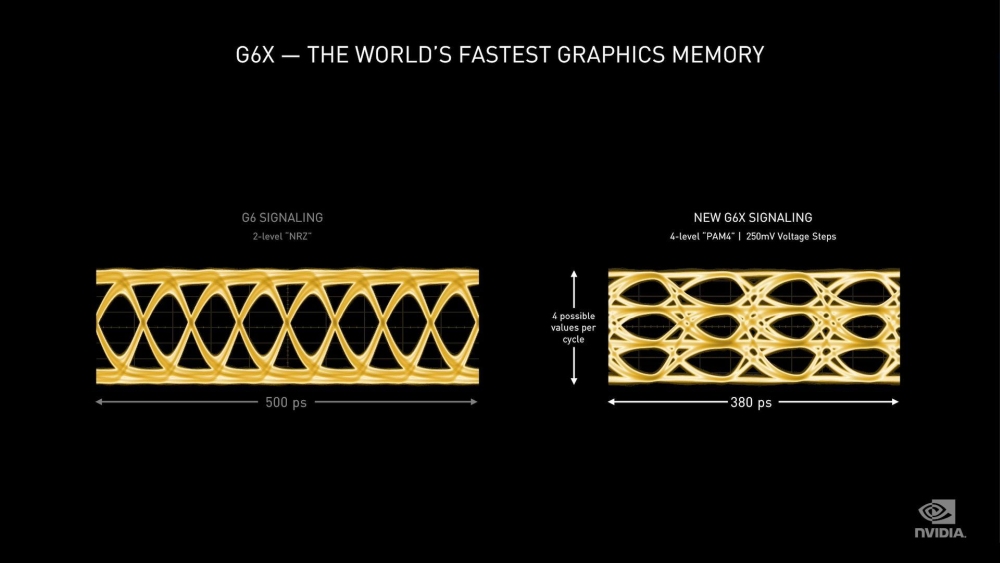 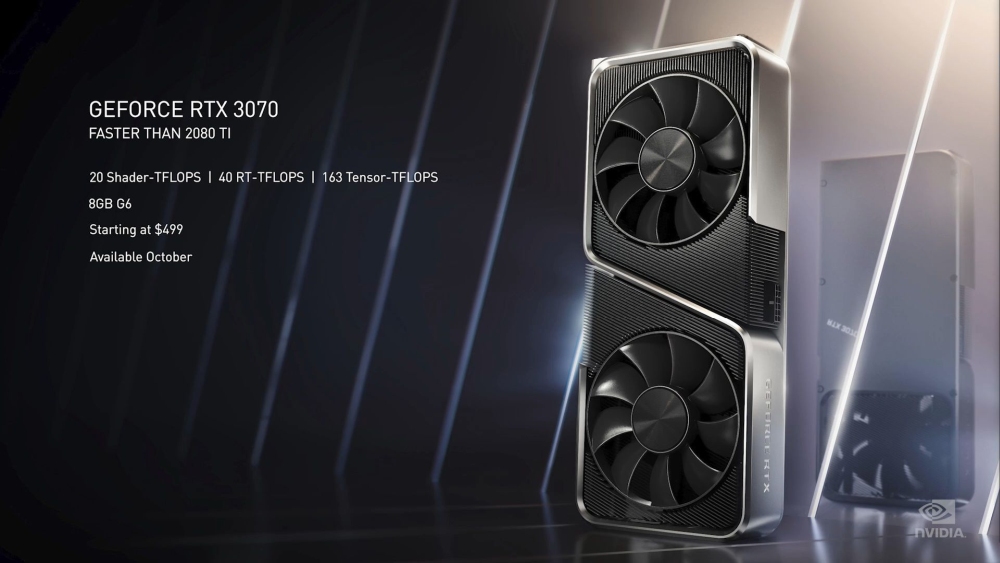 The RTX 3090 and the RTX 3080 apparently shared a similar cooler and PCB design, which includes an ultra-compact PCB and cooler with independent push and pull fans, with dual axial flow through, providing 55 percent more airflow, making it 3x quieter, and 30 percent more efficient. This is probably compared to Turing-based RTX 20 FE series cards.

The RTX 3070 is an odd one, as it has two front-mounted fans, so this might be a standard or more conventional cooler design, but so far, details are quite scarce, and hopefully, we will hear more info from Nvidia soon, with specifications and all other details. 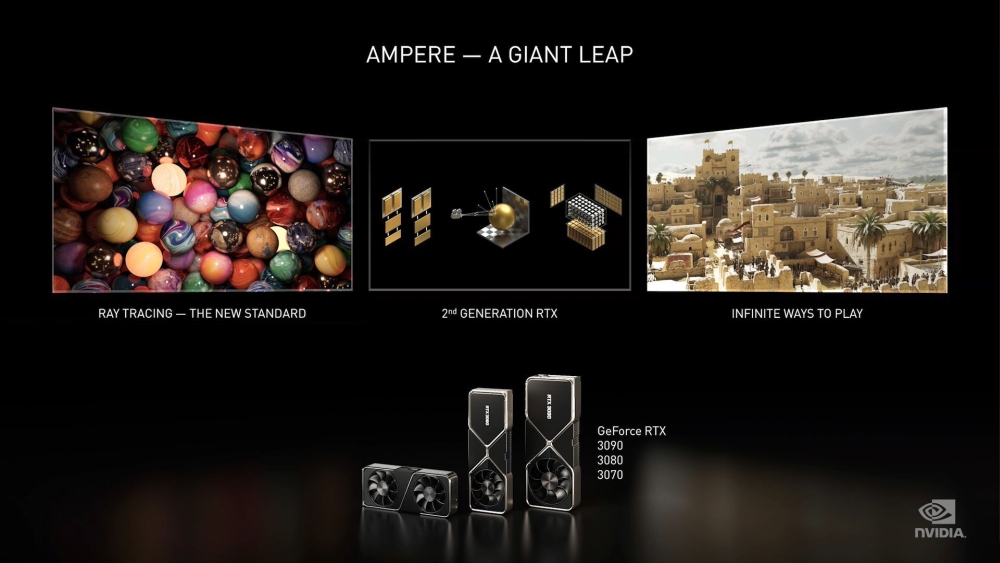 Last modified on 02 September 2020
Rate this item
(0 votes)
Tagged under
More in this category: « AMD lifts the curtain on the Radeon RX 5300 Nvidia RTX 30 series specifications are now official »
back to top