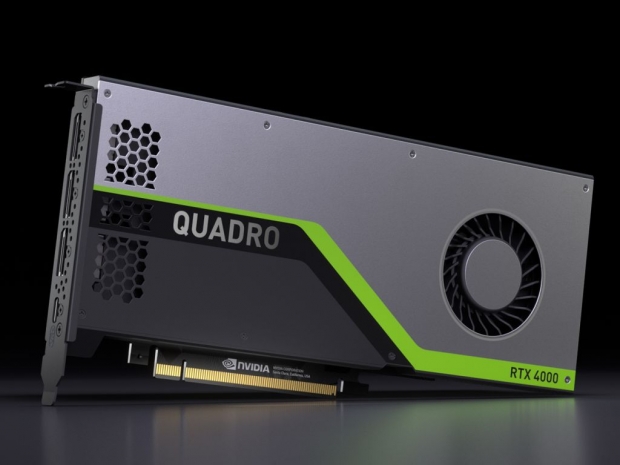 Nvidia has announced its latest Quadro RTX series graphics card, the Quadro RTX 4000, which will bring RTX to workstation professionals at a rather affordable price of under $1,000.

The new Nvidia Quadro RTX 4000 will be joining the Quadro RTX 8000, 6000, and the Quadro RTX 5000. With the Quadro RTX series ranging from $2,300 to $10,000, this will make the new RTX 4000 rather appealing to those professionals who have a smaller budget but still looking for a Turing-based Quadro with hardware accelerated ray tracing.

According to specifications provided by Nvidia, the Quadro RTX 4000 packs 2,304 CUDA cores, 288 Tensor cores, and 36 RT cores, as well as comes with 8GB of GDDR6 memory. It also comes with hardware support for VirtualLink, improved performance with VR applications, including Variable Rate Shading, Multi-View Rendering and VRWorks Audio, and more.

In terms of performance, the Quadro RTX 4000 pumps out 43T of RTX-OPS, 6 Giga Rays/sec, and 7.1TFLOPs of FP32 compute performance. Despite its 160W rated TDP, Nvidia uses a single-slot cooling solution which should easily fit in any workstation case. It draws power from a single 8-pin PCIe power connector.

It also comes with three DisplayPort 1.4 outputs and the aforementioned VirtualLink USB-C port.

The Quadro RTX 4000 has an estimated price of US $900 and should be available directly from Nvidia in December, its workstation partners like Dell, HPE, and Lenovo, and other distribution partners all around the world.