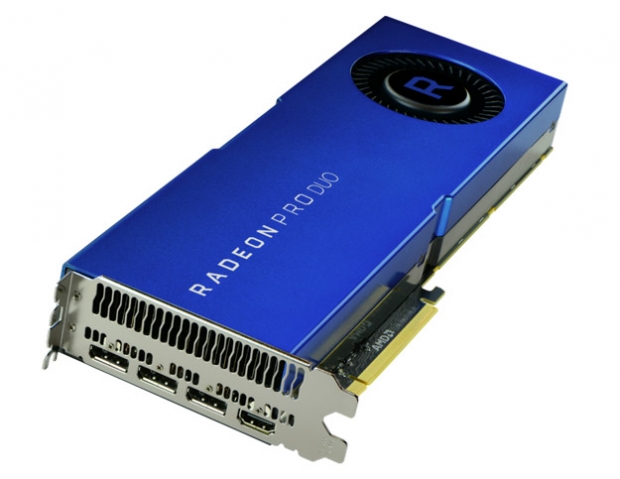 On Monday, Advanced Micro Devices took the wraps off its most powerful workstation graphics card to date, the Polaris-based Radeon Pro Duo. The card is a follow-up of last year’s computing powerhouse featuring two Fury X cores and is once again marketed for superior multi-tasking, accelerated applications, and the creation and playback of VR content.

This year’s Polaris-based Radeon Pro Duo is built on the capabilities of two Radeon Pro WX 7100s incorporated into a single board. But even with two of the company’s fastest graphics cores, the new model is surprisingly slower than its predecessor. While the first-generation Radeon Pro Duo based on Fiji architecture can output a stunning 16.38 TFLOPs of single-precision compute, today’s Polaris-based card clocks in at 11.45 teraflops, or just over the Geforce GTX 1080 Ti’s 11.3 teraflops.

The big improvements for 2017, however, are not in peak performance but in memory capacity and pricing. The Polaris-based Radeon Pro Duo quadruples the amount of onboard memory from 8GB of HBM to 32GB of GDDR5, while lowering the launch price from $1500 to just $999. These crucial changes are intended to reflect the growing need for higher framebuffers when developing 4K, 5K and 8K content, all at a much more affordable cost.

Power consumption has also been reduced using dual Radeon Pro WX 7100s on a single board. The Polaris-based Radeon Pro Duo now consumes just 250W of power versus the previous 350W, or right in line with Nvidia’s new Titan Xp workstation card. Keep in mind, however, that Nvidia’s offering is a single-GPU configuration for $1200, while AMD has reintroduced its dual-GPU workstation card for $999.

“We designed the Radeon Pro Duo to eliminate the constraints [of complex workflows], empowering professionals to multi-task without compromise, dedicating GPU resources where and how they need them,” said Ogi Brkic, general manager, professional graphics, Radeon Technologies Group.

Shipping worldwide at the end of May

AMD says its Polaris-based Radeon Pro Duo will begin shipping worldwide at the end of May. The company did not comment on why it decided to cut the performance of the Pro Duo relative to its predecessor, though one possible reason could be the high costs of procuring 32GB of GDDR5 for a single-board solution. The costs of quadrupling high-bandwidth memory (HBM) were likely too high in this case, so the company had to make a tradeoff to keep the pricing competitive with Nvidia’s latest Quadro and Geforce offerings. In its official press release, AMD cites an example of a 360 VR content creator who wanted to create and edit raw, un-optimized content without worrying about the limitations of hardware – likely the framebuffer limitations of having just 8GB of HBM memory on the first Radeon Pro Duo.

The company will be showing several demonstrations of the card this week at NAB 2017 in Las Vegas. Examples will include real-time 360 video stitching and VR previewing, VR content creation, post-processing with Adobe Premiere Pro, and accelerated rendering performance among others.