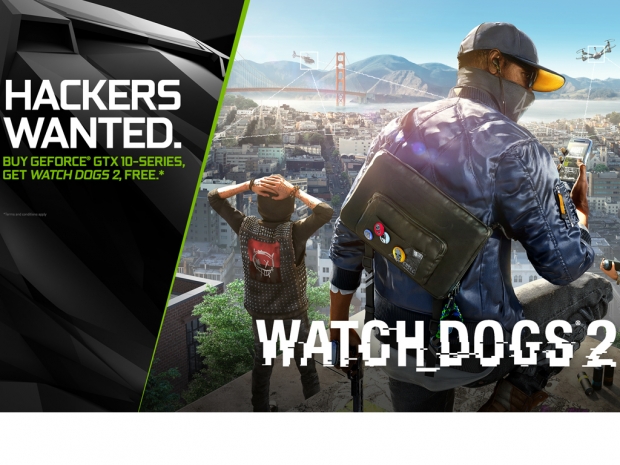 EVGA and other partners on board

Nvidia has now officially launched its new Hackers Wanted promotion which offers a free copy of Watch Dogs 2 game to those that buy GTX 1080 or GTX 1070 graphics cards as well as notebooks based on those two GPUs.

Ubisoft's Watch Dogs 2 has already got some nice reviews on consoles and the PC version will probably launch on November 29th. Nvidia has been working closely with Ubisoft on Watch Dogs 2 and it will feature some of its Nvidia GameWorks technologies including HBAO+, PCSS (Percentage Closer Soft Shadows) and HFTS (Hybrid Frustum Traced Shadows), TXAA for anti-aliasing, as well as Nvidia SLI, Surround, G-Sync, GameStream and Ansel support.

According to details at Nvidia's Watch Dogs 2 bundle page, the promotion is limited to certain partners and countries and include Geforce GTX 1080 and GTX 1070 graphics cards as well as systems and notebooks based on those same graphics cards.

EVGA has already launched its own promotion page and lists its SC17 1070 gaming notebook as well as plenty of GTX 1080 and GTX 1070 graphics cards as eligible for the promotion. According to Nvidia's Watch Dogs 2 bundle page, in addition to EVGA, ASUS, PNY and ZOTAC are all on board as authorized board partners.

Last modified on 22 November 2016
Rate this item
(5 votes)
Tagged under
More in this category: « MSI is first with low-profile GTX 1050 Ti AMD has nearly a third of the GPU market »
back to top