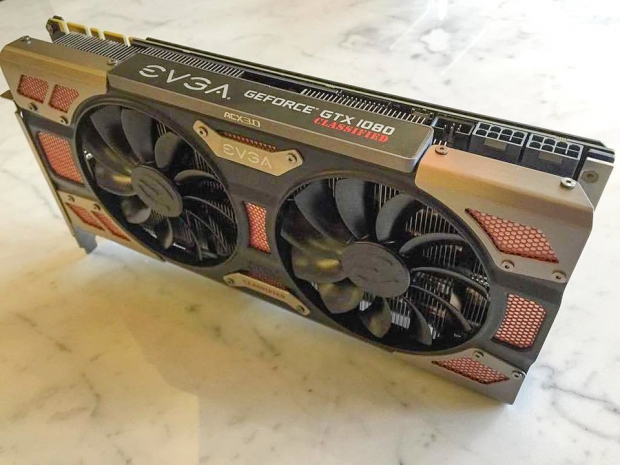 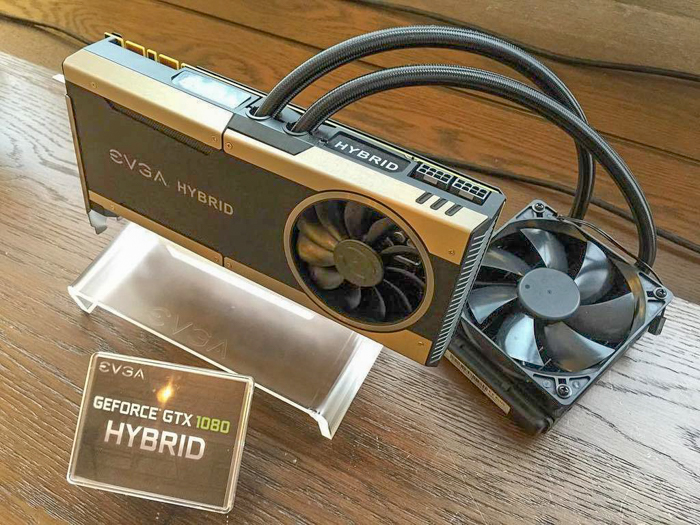 EVGA’s Geforce GTX 1080 Hybrid is the new announcement this week and features dual 8-pin PCI-E power connectors, each delivering 150W of power to the card. Due to the nature of its hybrid air cooling and closed-loop cooling design combined with dual BIOS chips and a 10 + 2 phase PWM, this is likely to be another impressive design win just like the GTX 980 Hybrid that came before it. The company also sells its Hybrid water cooler unit separately as an accessory for a few of its cards, and we can hope they will expand compatibility to include more SKUs in the near future.

Given that EVGA’s Hybrid models are usually priced above air-cooled parts but below Hydro Copper ones, we can expect a price above the Founders Edition when it launches shortly. 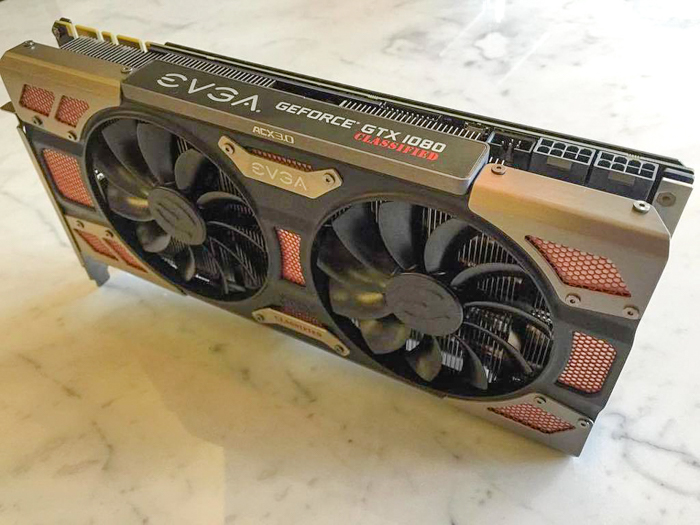 The EVGA Geforce GTX 1080 Classified is the company’s successor to the Geforce GTX 980 Classified (04G-P4-3988-KR), which was introduced in September 2014. The former card was the first Maxwell GPU to ship with a 1400+MHz Boost clock, and now the company is getting ready to release specs above the 1850+MHz Boost threshold, although it has yet to announce frequencies for its new top-tier Classified product.

As of now, the ASUS ROG Strix Geforce GTX 1080 claims the highest non-reference frequencies with a 1784MHz base clock and 1.94GHz Boost clock in OC Mode. Meanwhile, the MSI Geforce GTX 1080 Gaming X 8G ties with EVGA’s Geforce GTX 1080 SC for second place with a 1708MHz base clock and 1847MHz Turbo clock in OC Mode. EVGA will need to top ASUS if it wants to maintain the performance lead, and if this doesn't happen with the Classified then it will probably happen with a Kingpin edition around a few months from now. 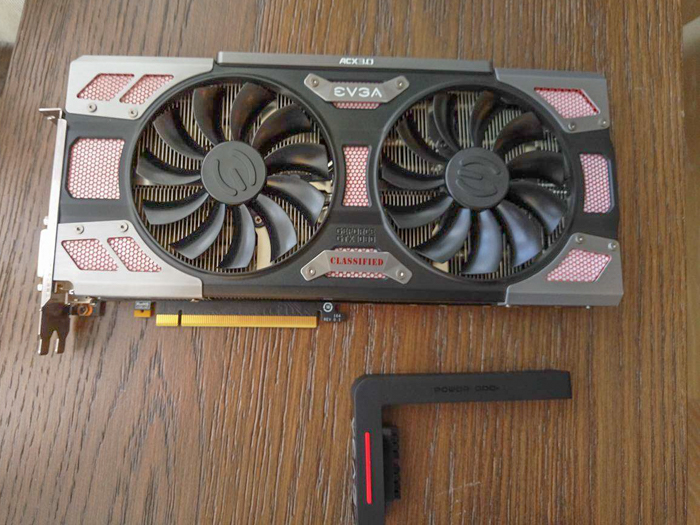 The GTX 1080 Classified also features two 8-pin PCI-E power connectors each delivering 150W of power to the card, and now power cables can be connected to an add-on accessory called the EVGA Power Link. This is a very simple, L-shaped power bracket that safely routes PCI-Express power in a right-angle and gives system builders more flexibility in cable management at any given time. 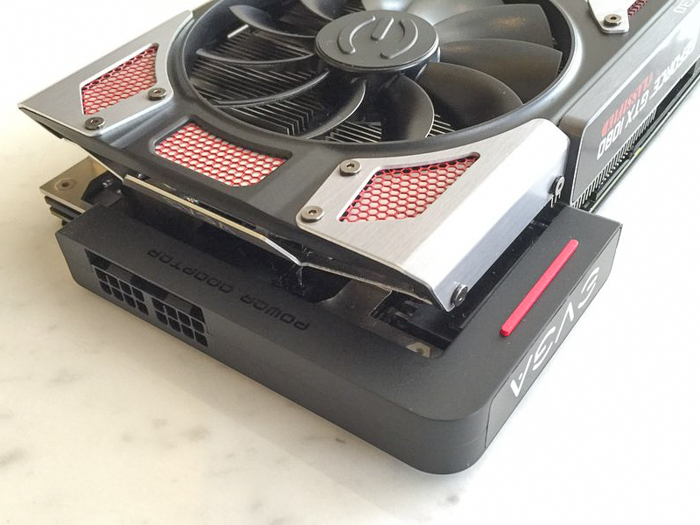 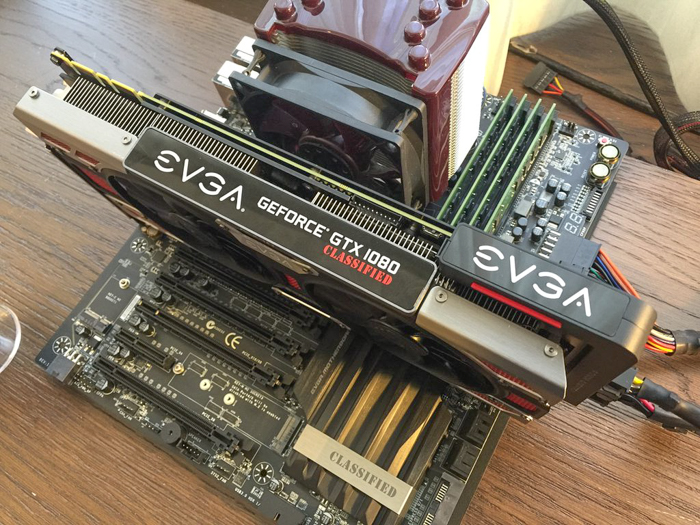 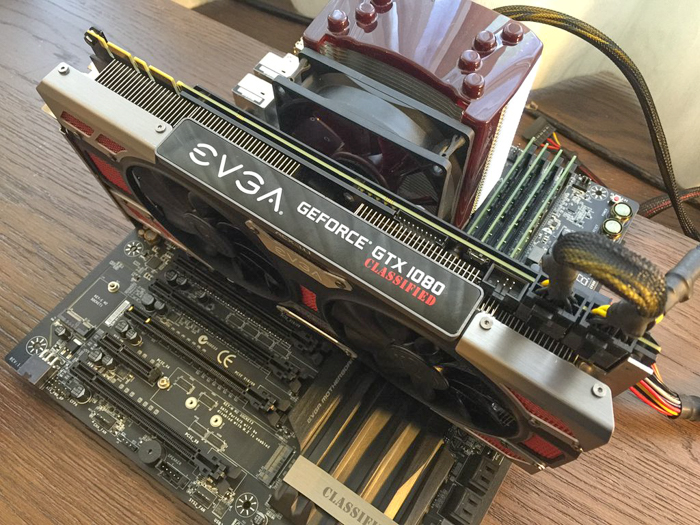 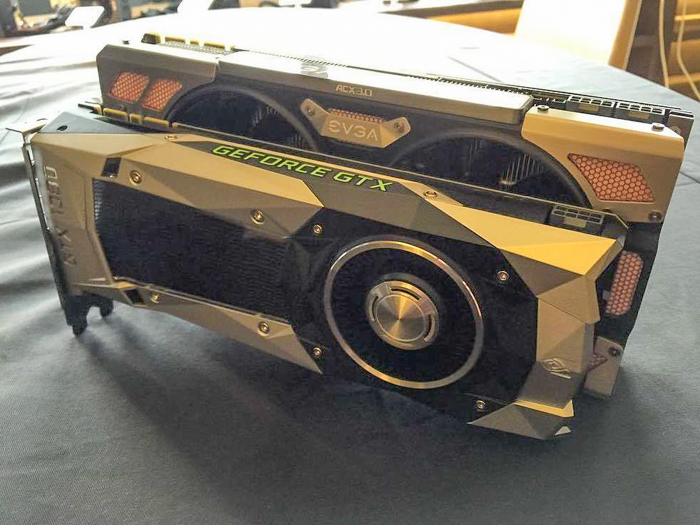 Given that the GTX 1080 FTW is priced at $679, we can expect the Classified to be at least $699 if not higher when it becomes available shortly. 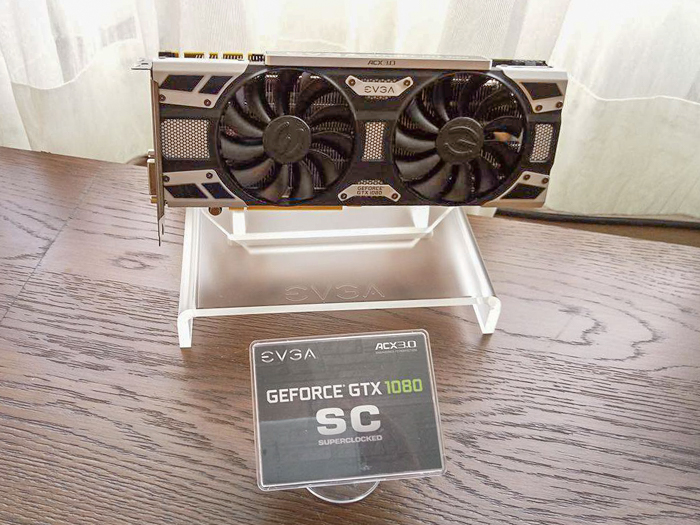 EVGA also took some time to display its GTX 1080 SuperClocked ACX 3.0 card, featuring a redesigned cooling solution with increased heatpipe and copper contact area. The new design delivers up to 15 percent cooler memory, 13 percent cooler MOSFETs, 10 percent cooler heatpipes and a 13 percent quieter fin design compared to the previous ACX 2.0 cooler. The card runs at a 1708MHz base frequency with a 1847MHz Boost clock and will be priced at $649.99. For reference, Nvidia’s Geforce GTX 1080 Founders Edition frequencies are a 1607MHz base clock and 1733MHz Turbo clock.

EVGA will release one more GPU right above the GTX 1080 SC and right below the GTX 1080 Classified called the GTX 1080 FTW. This card will feature 10 + 2 phase power, dual BIOS chips, the ACX 3.0 cooler and a TDP of 215W. Just like its higher-clocked Classified counterpart, clockspeeds have yet to be announced, but it will be priced at $679.99 when it becomes available shortly.

Last modified on 04 June 2016
Rate this item
(26 votes)
Tagged under
More in this category: « AMD Radeon RX 480 CrossFire rendering differently vs GTX 1080 Intel does not think you need a GPU for HPC »
back to top