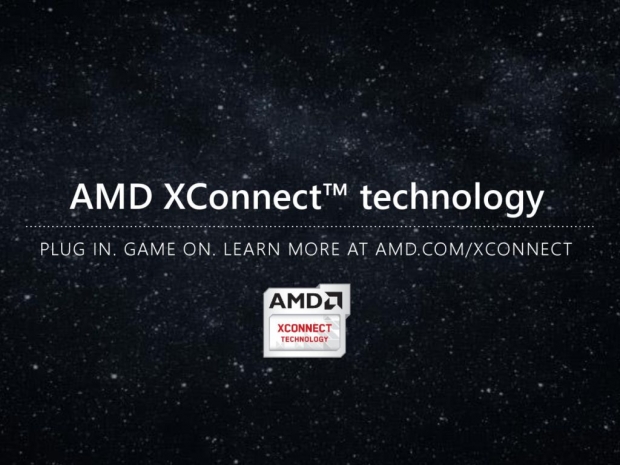 While Intel unveiled its Thunderbolt 3 in June last year, it was only back at CES 2016 in January that we have seen some of the first implementations of external graphics cards via either Thunderbolt 3 interface or a proprietary PCIe cables. Some of the unveiled devices was the Razer Stealth Notebook with Razer Core external GPU, MSI's Gaming Dock and Alienware's Graphics Amplifier which works with Alienware 13, 15 and 17 R2 notebooks. While MSI's and Alienware's solutions used a proprietary cable and PCIe connector, Razer has decided to go for Thunderbolt 3 interface and is currently the only device that will use AMD's XConnect technology.

In case you somehow missed it, the Thunderbolt 3 interface, described as "the USB-C that does it all", is developed by Intel, and doubles the bandwidth of Thunderbolt 2 by reaching 40Gbps (5GB/s) and can can simultaneously drive two external 4K displays at 60Hz. It also support PCI-Express 3.0 as well as HDMI 2.0 and DisplayPort 1.2.

While there have been some talk after CES 2016 regarding AMD's renewed push into external graphics market, the new Radeon Software Crimson Edition 16.3 driver update released today is the one that brought initial support for the XConnect, as AMD has decided to call the new external graphics technology.

According to information now provided by AMD, the new XConnect Technology has plug'n'play support for any Thunderbolt 3 eGFX enclosure configured with Radeon R9 300 or Fury series graphics cards. It also provides certain flexibility as you can use both the laptop display or an external monitor. The XConnect Technology also has certain requirements, including Thunderbolt 3 (USB-C) port, 40Gbps Thunderbolt 3 cable, Radeon Software 16.2.2 or later, Windows 10 OS and BIOS ACPI extensions for external GPUs.

We still do not have any performance numbers as Razer's Core has yet to ship so we will have to wait a bit longer for those. It appears that AMD plans to vigorously push for external GPU concept, so hopefully we will see even more solutions soon as it makes sense to give an ultra-thin/Ultrabook notebook enough GPU power over an external GPU in order to play your favorite game when you are at home and still keep all the benefits of an ultra-thin/Ultrabook, at long as it has the Thunderbolt 3 port. 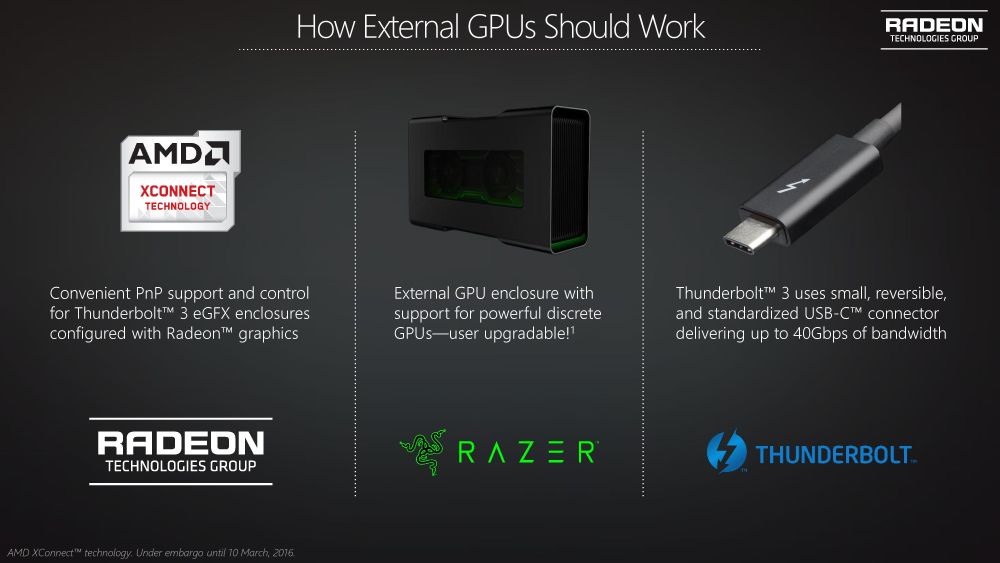 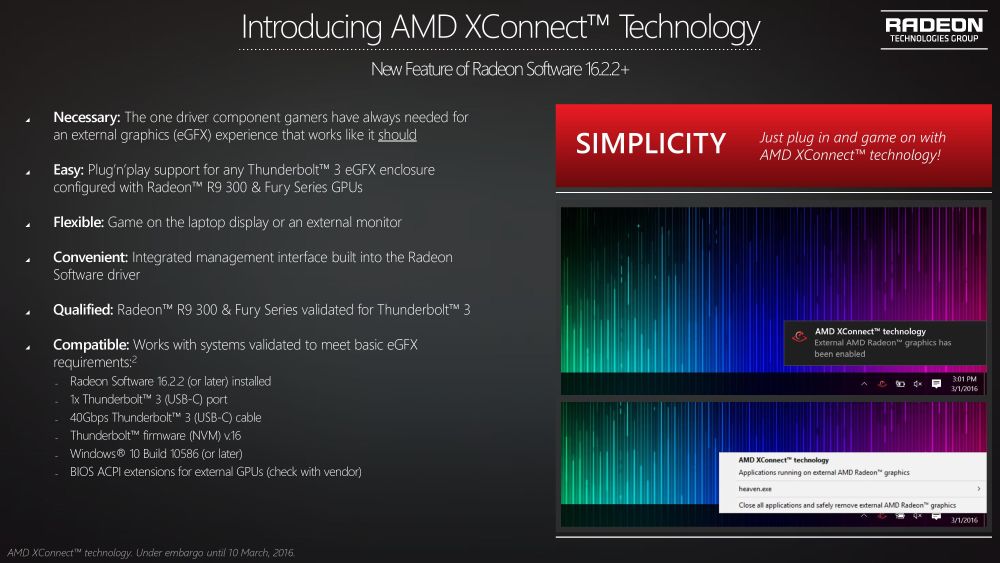 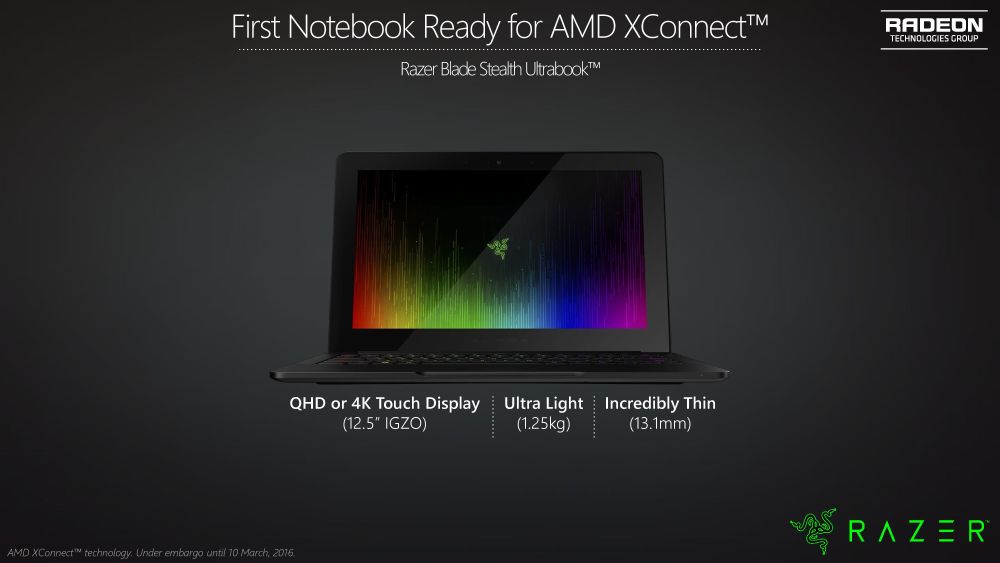 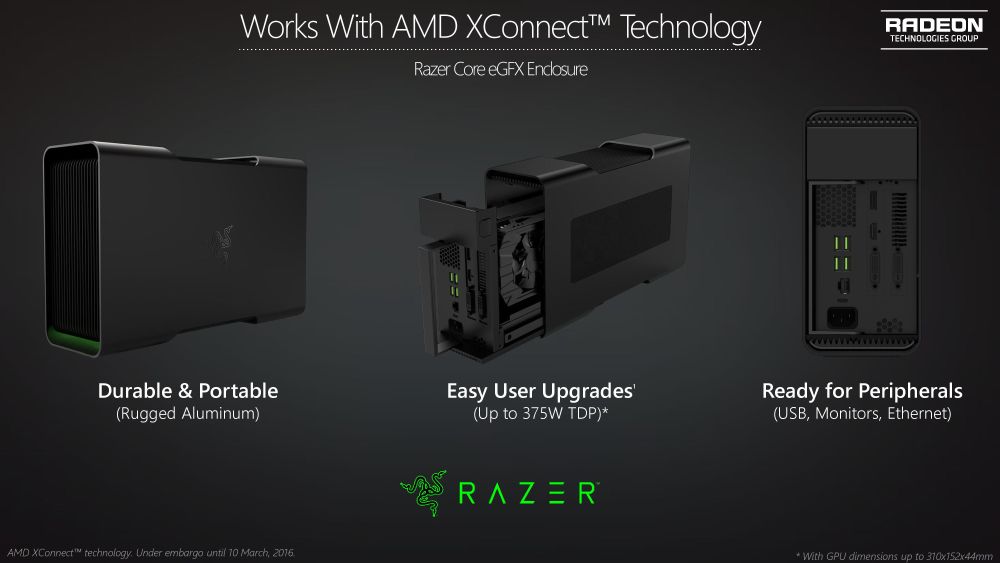 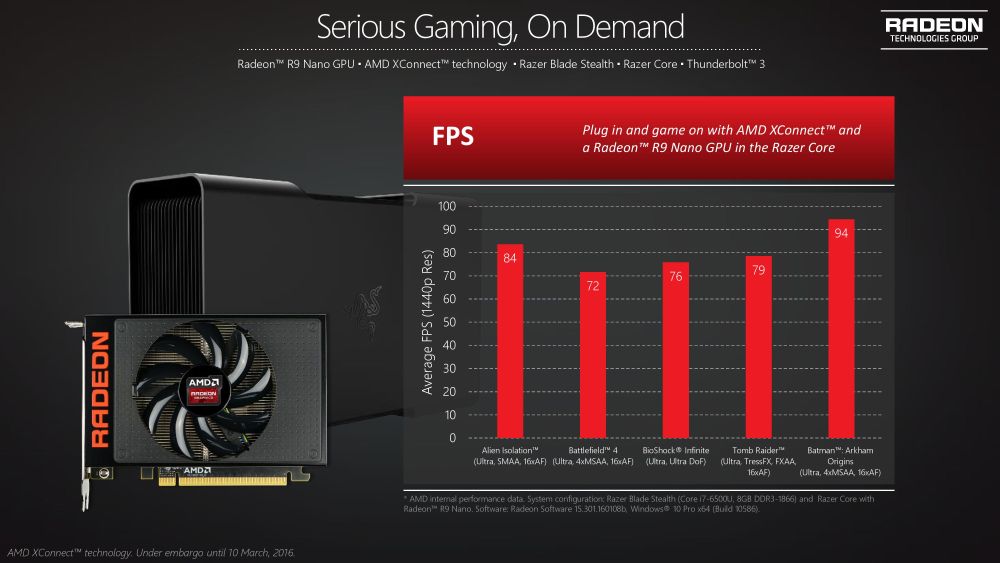