We managed to confirm that the upcoming AMD Radeon R9 285, based on AMD's new Tonga GPU and scheduled to launch sometime this month, will pack 1792 Stream Processors.

According to industry sources familiar with the matter, AMD's upcoming Radeon R9 285 graphics card is indeed based on the Tonga Pro GPU and it will pack 1792 Stream Processors. This puts it in line with the venerable Tahiti Pro based R9 280 which it will eventually replace on the market. The Tonga Pro GPU will end up clocked with a 918MHz base GPU clock, while the GDDR5 memory paired up with a 256-bit memory interface will end up clocked at 1375MHz (5.5GHz effective).

Our sources said the maximum TDP for the Radeon R9 285 is set at 150W. Recent rumors suggested that the AMD Tonga GPU will be very power efficient or at least better than Tahiti, but we have to wait and see some benchmarks before leaping to any conclusions.

Of course, some, if not all, AMD AIB partners will come up with custom designs so GPU base and GPU Boost clocks will be different. According to our sources, the performance of the Radeon R9 285 should come close to the Geforce GTX 770 and it will be slightly faster than Radeon R9 280, mostly due to higher GPU clocks.

Earlier this week the first Tonga cards were pixellized and leaked by Videocardz.com.

The leak included cards from HIS, XFX and Sapphire. All three cards appear to be 2GB models, but there is a good chance that some AIBs will have 4GB versions as well. 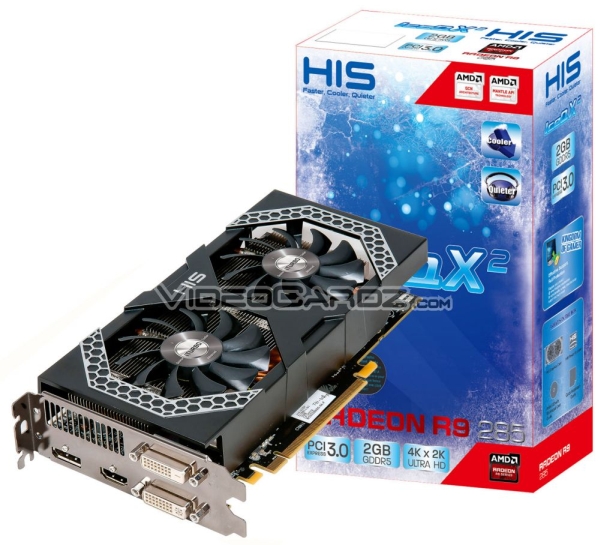 Since the new cards are closely related to existing Tahiti-based products, we are bound to see a lot of non-reference designs as well. In fact, even the leaked first batch of R9 285 cards features some fancy non-reference coolers. In other words, consumers won’t have to wait for a tweaked card with quality cooling, which also helps.

In any case, the upcoming AMD Radeon R9 285 will certainly be an interesting product and will relieve some pressure created by Nvidia's upcoming Maxwell-based graphics cards, at least if the price/performance ratio ends up to be good.