With Tahiti and Curacao GPUs

In addition to the recently announced Radeon R7 250X graphics card, AMD is allegedly preparing two more graphics cards, the R7 265 and the R9 280, based on the Curacao GPU and the well known Tahiti GPU.

The information comes from Chinese VR-Zone and the R7 265 will be based on Curacao GPU, one behind both the R9 270 and the R9 270X graphics card, and not the expected Bonaire GPU which is behind the R7 260 series graphics cards. We will be looking at a cut-down version of the Curacao GPU which will end up with 1024 Stream Processors, 64 TMUs, 32 ROPs and a 256-bit memory interface paired up with 2GB of GDDR5 memory, most likely. The GPU should end up clocked at around 900MHz while the memory will work at 4.8GHz.

The Radeon R9 280 will be based on the good old Tahiti GPU and it will be quite similar to the previously release HD 7950 graphics card. It will pack 1792 Stream Processors, 112 TMUs, 32 ROPs and a 384-bit memory interface paired up with 3GB of GDDR5 memory. The GPU is expected to be clocked at over 800MHz while memory should end up at 5.0GHz.

Unfortunately, the precise date of the release is not revealed but we suspect that we might hear something about them around Cebit show in March. 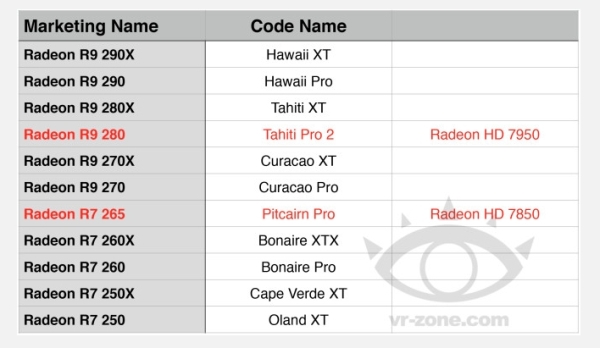 Last modified on 12 February 2014
Rate this item
(0 votes)
Tagged under
More in this category: « Powercolor launches its own R7 250X Nvidia Geforce GTX Titan Black pictured »
back to top