As we all know AMD's Mantle rollout didn't go as smoothly as expected, but we're slowly getting there. AMD already revealed its performance numbers for Battlefield 4 and StarSwarm, but DICE has a set of interesting figures, too.

Writing in the company blog, Frostbite technical director Johan Adersson explained a thing or two about Mantle and provided a step-by-step guide for all those who would like to try it out themselves. More importantly, he shared a few performance numbers and in some scenarios they are very impressive indeed.

The first test involved an A10-7850K APU, 720p medium settings and the level was Singapore Beach (single player) - which is very CPU intensive. Mantle delivered a 14 percent performance boost, taking the frame rate from 39 to 43fps. 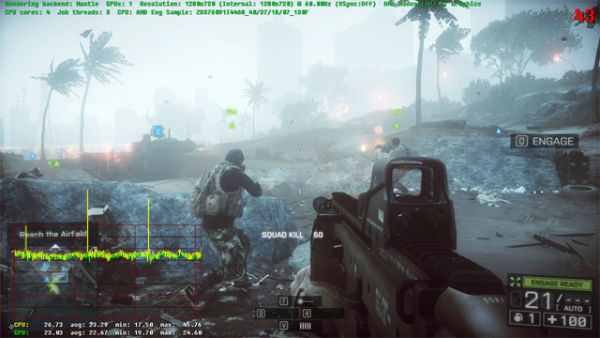 Test case 2 is described as "standard 64-player multiplayer". The test rig is different, FX-8350 processor, HD 7970 graphics, 1080p Ultra settings and the level is Siege of Shanghai. DICE notes that Mantle support for HD 7970 cards is not available yet, but it will be added in future releases. The results were much better, a 25.1 percent boost brought the frame rate from 53 to 67fps.

The last test was a high-end single player scenario with multiple GPUs. The test system was powered by a Core i7-3970X Extreme and it featured two R9 290X cards. The quality settings were 1080p Ultra with 4x MSAA. The results were staggering. The frame rate with Mantle shot up to 116 from 78fps, a 58 percent increase. 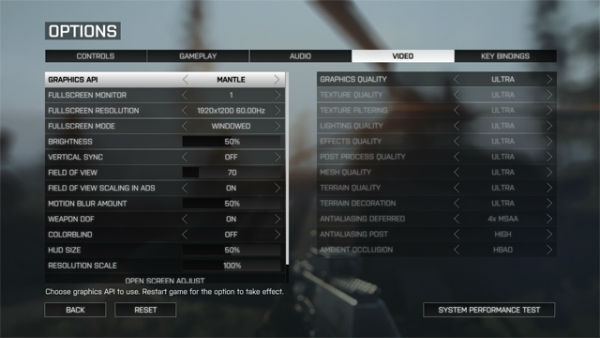 What's next for Mantle?

As we pointed out earlier, Mantle will not miraculously speed up every GCN-based gaming rig out there. Its biggest benefit is on the CPU side, not the GPU side. It eliminates a lot of CPU overhead and in doing so it simply allows people to get more bang for their buck. One could argue that it's bad news for Intel, since it will make cheap APUs more competitive, but it also works wonders on Intel-based systems depending on what sort of Radeon they happen to use.

However, the gains without powerful discrete graphics, when the GPU is the bottleneck rather than the CPU, aren't nearly as spectacular as those on high-end GPUs. Mantle will not transform mainstream APUs into gaming rigs, as they are bottleneck by their on-die GPUs.

The results are nonetheless impressive and we can't say we expected more, although we were hoping for bigger gains on low-end systems and APUs. We also need to see a few independent tests with different hardware configurations.

The biggest problem for AMD might have nothing to do with Mantle or hardware - it won't be easy to market Mantle and get the word across. AMD's marketing team basically need to let consumers know that they can invest in a somewhat faster Radeon and save a bit of cash when they choose their CPU. This is not an easy message to deliver. It will also depend on the speed and scope of Mantle adoption among developers, but that's another story altogether.

You can check out AMD's Mantle performance claims here.