Overclocked GTX 780 cards are ready for launch, but due to Nvidia's own restrictions, the benchmark results for the overclocked cards are due out tomorrow. Today reviewers are only allowed to post benchmark results for the plain GTX 780. However we are allowed to talk about non-reference cards and we want to reveal specifications for the one of the most deadly gaming wapons that we have seen so far, dubbed EVGA GeForce GTX 780 Superclocked w/ EVGA ACX Cooler.

According to the specifications the Superclocked card is insanely fast and very quiet. Let's say this does not come as a supprise, as we all know the card is based on the aproved GK110 GPU which is used for the fameous GTX TITAN. Specification wise the GTX 780 ended up with 50% more CUDA cores and with 50% bigger frame buffer than the GTX 680. The memory interface is 384-bit whats sums up to 224.3 GB/s bandwith. In practice the GTX 780 card should end up about 30% faster than the GTX 680. Off course, due to the factory overclock we expect even better scores for the EVGA GTX 780 Superclocked.

The reference cooler, previously seen on the GTX Titan, is really quiet and it comes with minimal fan speed fluctations due to a new adaptive temperature controller. The cooler is less noisy than the GTX 680. However the GTX 780 Superclocked is equiped with brand new EVGA ACX cooler which is designed as dual fan cooler. 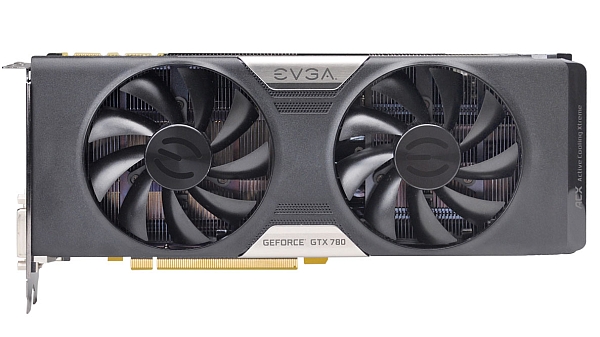 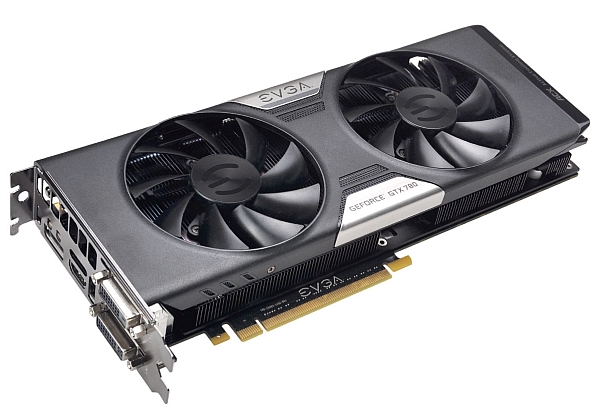 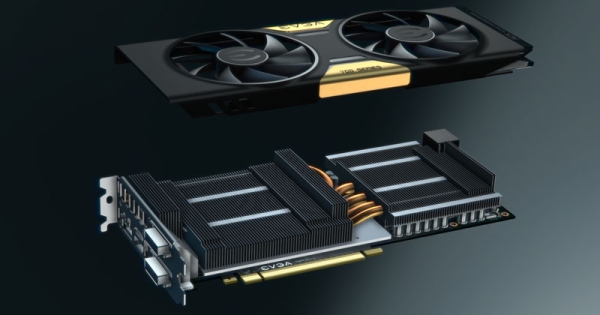 The ACX cooler should give the Superclocked card an edge when dealing with additional overclocking while keeping temperatures in check. EVGA will also be offering the reference single fan solution from Nvidia.

The EVGA ACX cooler uses a double ball bearing design. Starting with a 40% increase in heatsink volume, the ACX is more efficient at dissipating heat, allowing for 15% lower GPU temperatures. A reinforcement baseplate maintains a straight PCB, and helps lower mosfet temperatures by 7% and memory temperatures by 15%. EVGA spared no effort to ensure that even the fan blades were of the highest quality; with a 700% increase in strength, and 25% lower weight when compared to competitors dual fan designs. This makes the fans 20% more efficient by requiring lower power levels. 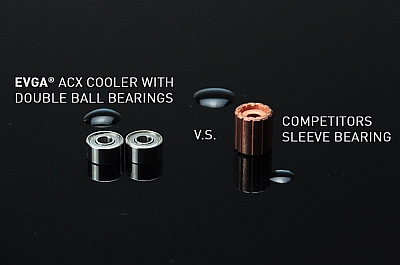 With the introduction of the GTX 780 and thanks to the advanced GPU Boost 2.0, for the first time users are allowed to set a target temperature. Nvidia also decided to give a day one support for overvoltaging enabling higher clocks for overclocking. EVGA PrecisionX is updated to support new cards and we are just waiting to try it with GTX 780 Superclocked.

The GTX 780 needs 6+8-pin PCI-Express power connectors and has 250W TDP. It comes with two DL-DVI, HDMI and DisplayPort outputs. 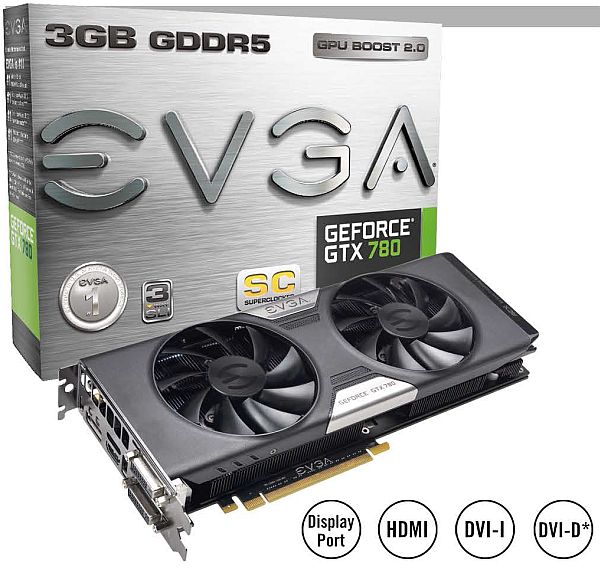 The price puts the reference cards at €641, but as always the prices for custom designed and overclocked card are set a bit higher.

Last modified on 23 May 2013
Rate this item
(0 votes)
Tagged under
More in this category: « Not all partners to go with Tahiti LE GPU Powercolor announces PCS+ HD 7870 Myst. Edition »
back to top