Gigabyte releases its own Radeon HD 7990

Following the flock of AMD AIB partners, Gigabyte has also launched the new dual-GPU flagship Radeon HD 7990. To be sold under the GV-R799D5-6GD-B model name, the new Gigabyte Radeon HD 7990 is based on two 28nm Tahiti GPUs and features a total of 4096 stream processors (2048 per GPU).

As we wrote yesterday, all partners will have to stick to AMD's reference design for now and we are not sure if we will a custom solutions anytime soon. The HD 7990 graphics card feature 4096 stream processors and works at 950MHz base and 1000MHz Boost GPU clocks while 6GB of GDDR5 memory (3GB per GPU) ended up clocked at 6000MHz. Paired up with a 2x384-bit memory interface the total memory bandwidth ended up at 288GB/s per GPU.

Since it sticks to AMD reference design, the Gigabyte Radeon HD 7990 also features a dual-slot, triple-fan cooler that pretty much does a really good job in keeping those two GPUs well cooled and even does it a reasonably low noise levels. It needs two 8-pin PCI-Express connectors and comes with four Displayport and one DVI output with support for five displays.

As noted earlier, all Radeon HD 7990 graphics cards are expected to start showing up in retail/e-tail in about two weeks with a suggested price at US $999. 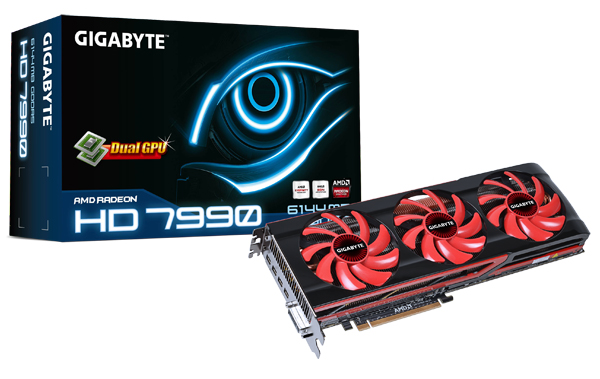