Roundup: GTX 680 killer or runner up, depending on who you ask

Based on the same general specs as the original HD 7970, the AMD Radeon HD 7970 GHz Edition brings higher clocks and a new AMD PowerTune with Boost, a new way of making the card work at higher clocks by taking into account power consumption and temperatures. The new Radeon HD 7970 GHz Edition is, of course, still based on AMD's 28nm Graphics Core Next (GCN) architecture and features 2048 stream processors, 32 ROPs and 3072MB of GDDR5 memory paired up with a 384-bit memory interface.

The new Radeon HD 7970 GHz Edition works at 1000MHz for the GPU and 1500MHz (6.0GHz effective) for the mentioned 3GB of GDDR5 memory. The new Powertune takes the card as high as 1050MHz, as long as the temperatures and power consumption are below certain values and if those values are exceded, it simply downclocks the card back to 1000MHz.

As far as the benchmarks and various games are concerned, the HD 7970 GHz Edition generally beats the Geforce GTX 680 but as always, such a result comes at a price and with some tradeoffs. In the case of the HD 7970 GHz Edition, the drawbacks are translated into higher load power consumption and higher noise, although the latter will surely be fixed with custom coolers that some partners have already talked about. The ZeroCore tech still keeps the idle power consumption at a lowest possible mark, and does the job quite well.

According to some reviews around the net, the HD 7970 GHz Edition wins in some games and loses in others but mainly it is faster when pushed on higher resolutions which are clearly GTX 680's Achille's heel.

The launch price of US $499.99 is actually lower than the US $549.99 launch price of the original HD 7970, but back then, Nvidia was not around with its US $499.99 GTX 680. We can't shake the feeling that AMD is pulling an Nvidia-like move with its GHz Edition card, focusing solely on higher clocks in order to brutely claim the single GPU performance crown, with power consumption and noise emissions taking a back seat.

The tide is definitely changing and while Nvidia is now talking about power efficiency and performance-per-Watt, AMD is pushing its GPUs hard to take back the GPU crown. The fact that it can do so with a revamped six-month old GPU is impressive to say the least.

Most reviews agree on at least couple of things. The AMD HD 7970 GHz is a good and currently fastest single GPU graphics card that is definitely a nice refresh of the HD 7970 but with a higher load power consumption, loud cooler, and that US $499.99 price tag, the GTX 680 ends up to be a generally better card, at least if you do not plan on running multi-display setups. Of course, AMD is giving Nvidia a run for its money and competition is always good. 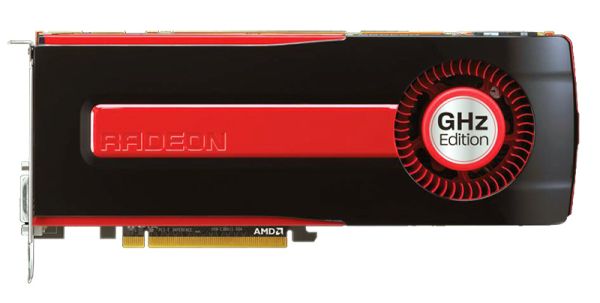