In addition to the HD 6970 X2 card that is yet to get a release date, Powercolor decided to showcase yet another dual-GPU card that should be available as of next month - the Radeon HD 6870 X2.

The HD 6870 X2, as Powercolor calls it, packs two 40nm Barts GPUs connected via Lucid's Hydra Engine chip and a total of 2GB of GDDR5 memory on the same PCB. It will have a total of 2240 Stream processors, GPUs clocked at 900MHz and dual 256-bit memory interface for those 2GB of 4200MHz clocked memory. The backplate features two DVI, two mini DisplayPort and an HDMI 1.4a outputs.

The new dual-GPU card will need two 8-pin PCI-Express power connectors and will be a decent option for those that want to go for HD 6870 Crossfire without the need for additional PCI-Express slot. It also features a Crossfire connector in case you want to daisy chain two of these cards for some quad-GPU fun.

The card is cooled by a rather large dual fan cooler with a total of five copper heatpipes. According to latest details, the card should appear on retail/e-tail shelves sometimes next month with a price of US $449. This means that it will end up more expensive than two HD 6870 cards that are currently selling as low as US $190 a piece, but that's what you get when you pair two GPUs on a single PCB as you got to count for custom cooler and cost of bridge chip. 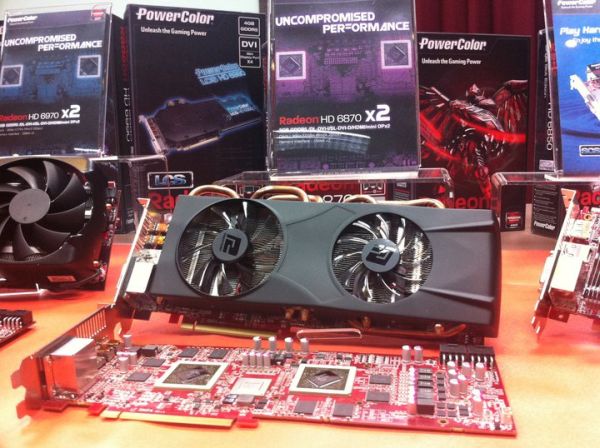