Getting in line with the Nvidia launch day, Gainward has prepared two different GTX 580 cards, the reference and the Golden Sample factory overclocked version.

As you all probably already know, the reference card is clocked at 772MHz for the 40nm GF110 GPU, 1544MHz for 512 CUDA Cores and 2004MHz for 1536MB of GDDR5 memory paired up with a 384-bit memory interface. On the other hand, Gainward's Golden Sample version features a rather nice factory overclock despite the fact that it still has the same reference cooler. The Gainward GTX 580 Golden Sample ended up clocked, or rather overclocked, to 835MHz for the GPU, 1670MHz for shaders and 2,100MHz for memory.

As we wrote before, the cooler is based on vapor-chamber technology, which is actually the first time that a reference card uses such a cooler and it looks like it is doing a great job. Both cards should be available as of today and you can expect the Golden Sample to be priced at a bit over €500, at least according to the first listing of similar factory overclocked cards. 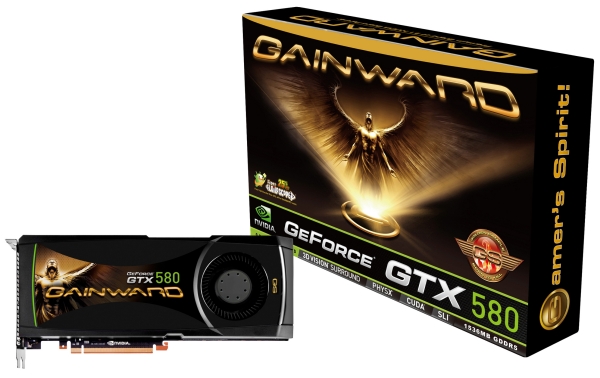