While waiting for the upcoming GF106 based graphics cards, Inno3D decided to spice things up with its new Geforce GTX 465 OC Vapor Freeze card based on the GF100 GPU.

The new card features a new dual slot cooler and a factory overclock. The full specification list include 352 CUDA cores, 700MHz GPU clock, 1350MHz shader clock and 1GB of GDDR5 memory clocked at 3400MHz and paired up with a 256-bit memory interface.

The cooler is based on vapour chamber technology and features five copper heatpipes and a 92mm fan that spins from 1000 to 4200RPM. The card features two DVI outputs and a single mini HDMI output.

Although the card has been previewd at Computex 2010 and listed at Inno3D's site there are still no details regarding the availability date or the price of the new card. 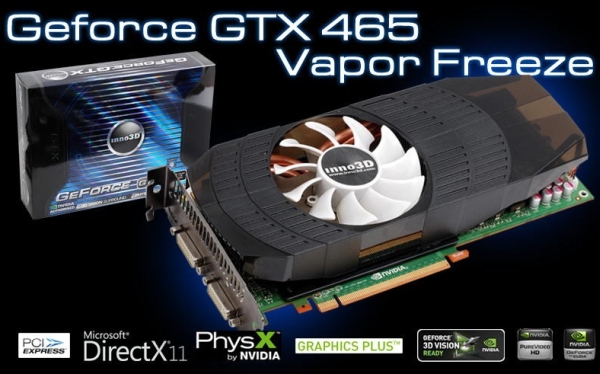 Last modified on 24 August 2010
Rate this item
(0 votes)
Tagged under
More in this category: « PowerColor rolls out low-profile HD 5750 POV/TGT working on water-cooled GTX 480 Beast »
back to top