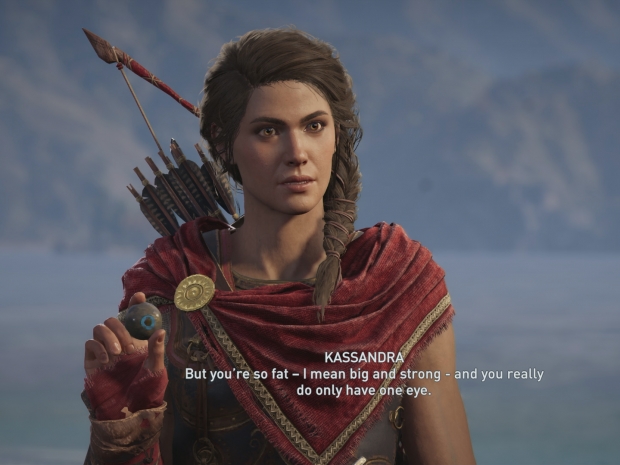 Even if they didn’t want one

An Assassin’s Creed Odyssey update insisted that female characters have a baby, in a move which suggested heroes would only “grow up” when they adopt good conservative values.

Odyssey was radical in that claimed to allow players to define their character’s sexuality. However, there was some alarm when the latest update insisted that lesbian characters took time out of their busy schedule to have a child by shagging a bloke.

Even if the character chooses not to sleep with the male character who was supposed to impregnate them, the character still ends up pregnant. When the characters have the baby, they get an upgrade called “growing up” which seems to imply that when you are young you can shag what you like, but when you grow up you will have a baby like most adults.

Some Odyssey players were upset by the DLC twist and a lengthy thread on the game’s subreddit filled with people expressing hurt over a broken promise.

One wrote that she is gay and felt like she was being punched in the stomach. On Twitter, people who saw Kotaku’s coverage complained that a game that had made them feel included now felt like a lie.

Odyssey creative director Jonathan Dumont said in a post on the game’s forums that "reading through player responses [to] our new DLC for Legacy of the First Blade, Shadow Heritage, we want to extend an apology to players disappointed by a relationship your character follows.

“This story intended to explain how your character’s bloodline has a lasting impact on the Assassins but looking through your responses it is clear that we missed the mark.”

He went on to say that players will not have to continue the romantic relationship in the next instalment of the game’s DLC, saying the developers wanted players to have the option of deciding that their character choice to procreate was a practical decision rather than a romantic one.

The plot development occurs at the end of the second chapter of a three part paid.

At the end of the DLC, the player’s character decides to enter into a relationship with either the daughter (if they’re playing as Alexios) or son (if they’re playing as Kassandra) of the proto-Assassin Darius. They then have a child. As Kotaku writer Heather Alexandra noted yesterday after playing through the DLC, the player can rebuff the romantic advances of Darius’ kid, but they’ll still wind up in a relationship and have the baby.

Ubisoft insists that the move is not an attempt to impose traditional conservative values on the game but part of a “set story”.

“Without spoiling it, you will engage in an important relationship as part of a set story. The motivation behind this relationship is yours to explore in game and will be reflected in your character’s story arc. There is one episode left in Legacy of the First Blade which will tie your character’s actions together.”

Dumont said that Alexios/Kassandra realising their mortality and the sacrifice Leonidas and Myrrine made before them to keep their legacy alive, felt the desire and duty to preserve their important lineage.

“Our goal was to let players choose between a practical view of ensuring your bloodline lived on or forming a romantic relationship. We attempted to distinguish between the two but could have done this more carefully as we were walking a narrow line between role-play choices and story, and the clarity and motivation for this decision was poorly executed. As you continue the adventure in [the] next episode Bloodline, please know that you will not have to engage in a lasting romantic relationship if you do not desire to.”

The downside with that is lesbian characters who are obsessed with male concepts of lineage will have to shag a bloke.

The company has said that the trophy/achievement players receive after their character has a child will be renamed, given that some players said that it implies that being gay or not having a kid or both is just a phase of being young.

Dumont said that it was definitively not written with that intention. "This was an oversight in the review process, and we very regrettably missed it. We share the frustration of players who find this offensive and the achievement/trophy name will be changed when DLC 1.3 patch is available.”

Last modified on 17 January 2019
Rate this item
(4 votes)
Tagged under
More in this category: « Activision Blizzard securities fraud investigation started The PC is the most popular gaming platform »
back to top