Plenty of games in a great bundle

Humble Bundle has been making some rather interesting bundles for quite some time but it has been a while since we saw a big publisher join up with them for something really interesting. Today, 2K Games jumped in for what might be the best bundle so far.

As always there are plenty of games that you can get depending how much you are willing to pay for the bundle so with anything above US $1 you get Bioshock, The Bureau: XCOM Declassifed and The Darkness II. In case you go over the average, which is set at US $7.47 at the time of the writing, you also get Bioshock 2, Mafia II, Spec Ops: The Line and couple of other games that will be announced later.

Last but not least there is the full bundle for which you have to pay US $20 or more where you also get XCOM: Enemy Unknown and Bioshock Infinite, two rather good titles that you really should not miss.

The best part of all Humble Bundle bundles is that the money spent goes into charity and this time around Humble Bundle is supporting the American Red Cross and Action Against Hunger charities. 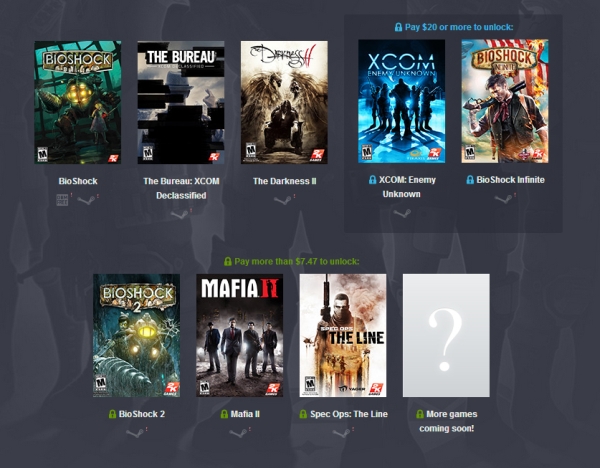