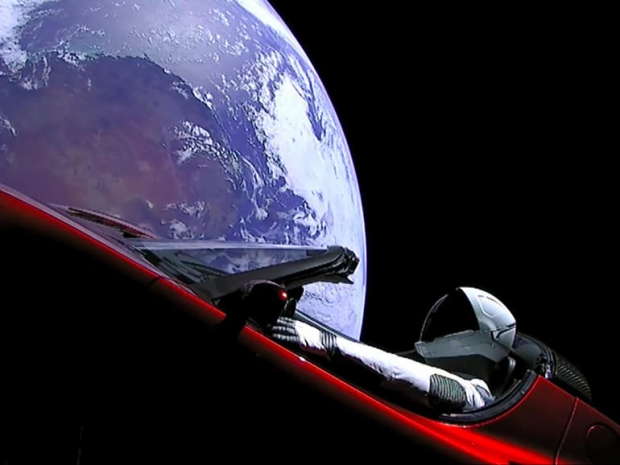 Elon Musk’s Tesla Roadster and its Starman pilot are likely to crash into the Earth, according to boffins who have been adding up some less than stellar numbers.

Starman blasted off on February 6, 2018 and is now barreling through space beyond the orbit of Mars. The Tesla Roadster and its pilot were chosen as a dummy payload for the maiden launch of the SpaceX Falcon Heavy rocket.

Elon Musk argued at the time a deadweight payload of metal blocks would have been just too boring.  While this might be a huge PR disaster for Musk and Tesla it does not seem that Starman will return long until long after Tesla and Musk are forgotten.

Orbital dynamics experts Hanno Rein, Daniel Tamayo and David Vokrouhlicky, there is a significant possibility of SpaceX's Starman crashing into Earth or Venus.

In a joint research paper, with the catchy title "The random walk of cars and their collision probabilities with planets" the scientists predicted Starman’s journey over the next few million years.

Professor Rein said: “Although we are not able to tell on which planet the car will ultimately end up, we’re comfortable saying it won’t survive in space for more than a few tens of millions of years.” In the study, the scientists said the Tesla sports car would make a close approach of the Earth within the first 100 years of its launch.

When this happens, the SpaceX spacecraft will come as close as the Moon.

The study reads: “Using an ensemble of several hundred realisations we were able to statistically determine the probability of the Tesla colliding with the Solar system planets on astronomical timescales."

There is the possibility Starman will not be around long enough to see the Earth up-close ever again.  Due to the violent and hazardous nature of space, Musk’s sports car is most likely crumbling to pieces under the weight of intense space radiation.

Last modified on 12 February 2019
Rate this item
(0 votes)
Tagged under
More in this category: « Apple worker charged with stealing its car secrets Amazon and GM invest in electric truck manufacturer »
back to top