Following the recent rumors regarding the possible update for the Apple's MacBook Pro Retina lineup, Apple has now officially updated both the 13-inch as well as the bigger 15-inch MacBook Pro with Retina display with new Intel Haswell mobile CPUs and more RAM than usual.

A couple of days ago Intel announced a total of seven new Core i7 and Core i5 Haswell mobile SKUs giving them a 200MHz clock bump compared to existing models and these are exactly the parts that will be inside the refreshed 13-inch and 15-inch Apple MacBook Pro Retina lineup.

The 13-inch MacBook Pro Retina lineup got three new models, all starting with 8GB of RAM and with a possibility to upgrade to 16GB for additional US $200. Since RAM is not user-upgradable it does not sound like a bad choice to go for 16GB from the start. The base model features a Hyper-threading enabled dual-core Core i5-4278U CPU clocked at 2.6GHz base and 3.1GHz Turbo clocks, 3MB of L3 cache, 28W TDP and Iris 5100 GPU. It comes with 8GB of DDR3-1600 memory, 128GB of flash storage space and a US $1,299 price tag. The newest most expensive 13-inch MacBook Pro Retina comes with a US $1,799 price tag and features dual-core Core i5-4308U CPU clocked at 2.8GHz base clock and 3.3GHz Turbo Boost as well as same 8GB of DDR3-1600 memory and 512GB of flash storage. 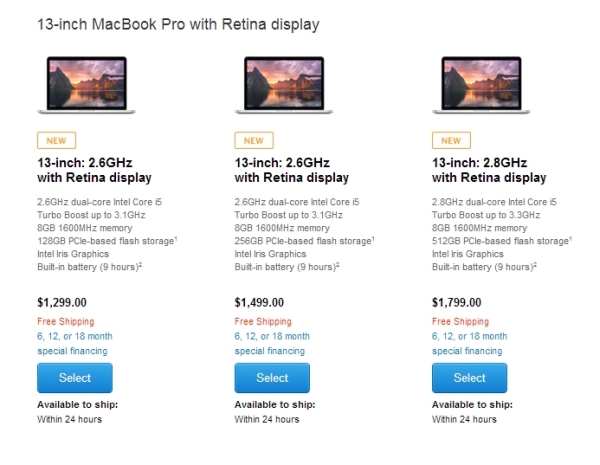 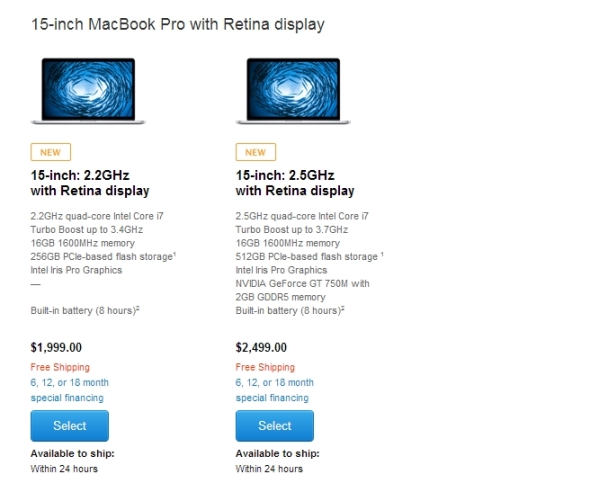 Apple decided to keep the lone 13-inch MacBook Pro (without Retina screen) and gave it an US $100 price cut down to US $1,099. Unfortunately, this one still sticks to dual-core Ivy Bridge Core i5 CPU which can hardly keep up with Haswell parts.

Last modified on 30 July 2014
Rate this item
(0 votes)
Tagged under
More in this category: « Nvidia officially launches the 8-inch Shield Tablet Microsoft cuts the price of Surface 2 »
back to top