Why is AMD playing around with gaming tablets?

Don’t get your hopes up

A few days ago AMD leaked a set of interesting press renders to TechRadar, featuring a beefy Windows 8.1 tablet with a dock and some detachable gaming controllers in tow. Dubbed Project Discovery, the tablet is based on AMD’s new Mullins tablet APU and the company told TechRadar that the tablet will be shown at the Consumer Electronics Show in January.

However, while some sarcastic punters may say this is a case of AMD emulating Nvidia in the sense that it’s building its own tablet to sell tablet chips few vendors want, this is simply not the case. Project Discovery is not an actual product. AMD maintains that it has no plans to launch an own-brand tablet and peripherals, but that doesn’t necessarily mean some of its hardware partners wouldn’t be interested. 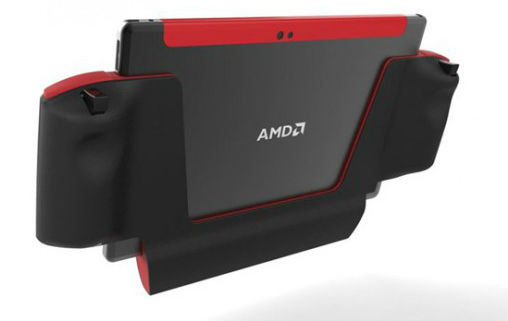 But would they be interested? As a gaming tablet, with Windows bloat and an underpowered ultra low voltage chip it doesn’t make much sense. Mullins scores just 570 in 3DMark 11 and although this is 22 percent more than what the Temash based A6-1450 can churn out, it is clearly not enough for serious Windows gaming by any measure. Of course, there are plenty of casual Windows games, but then again developers of such games are focusing their efforts on iOS and Android nowadays.

In other words, the tablet doesn’t have much in common with Nvidia’s Tegra Note 7 or Shield console. It is closer to upcoming Bay Trail-T tablets in terms of hardware. So why the game controller then? Honestly we have no idea, it’s probably just a few designers showing off and getting some press coverage. 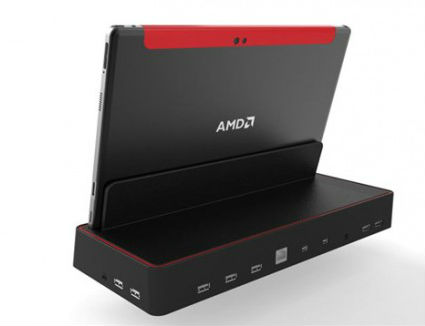 However, although everyone is focusing on the gaming aspect of the device, we find the dock a tad more interesting. It is said to use AMD DockPort technology and it’s packed with with USB ports, DisplayPort and HDMI outs and the render even shows what appears to be a LAN connector. In terms of connectivity, that’s what the vast majority of office boxes need.

Also, since AMD appears to be developing a platform with docking in mind from the ground up, much of the tech could be used for keyboard docks, which sounds like a much more tempting proposition for vendors. In essence, we are more interested in the convertible aspect of the device rather than gaming and a desktop dock. A convertible Mullins tablet would make a lot of sense, especially now that the first Bay Trail-T convertibles are starting to show up and Intel is going to great lengths to talk up its “2-in-1” approach.

The gaming angle appears to be in play just to prove a point. Although there’s really no market for ~2W Windows gaming devices regardless of form factor, GPU performance is what AMD hopes to use to differentiate its tablet SoCs from Intel offerings.

Rate this item
(0 votes)
Tagged under
More in this category: « Tegra Note 7 gets mixed reviews More dubious Nexus 10 leaks emerge »
back to top