Up to 60 percent more efficient with Haswell CPU

In addition to the new Surface 2, which runs on Windows 8.1 RT, Microsoft has also unveiled the new Surface Pro 2, a 10.6-inch ClearType equipped tablet that features Intel's 4th generation Core i5 CPU. The new Haswell chip is paired up with 4GB of RAM which should make it over 95 percent facter than most laptops on the market today, according to Microsoft at least.

The Haswell chip was enough to give it up to around 25 percent more battery life and when paired up to the new Power Cover it gets up to two and a half times more battery life as well. According to Microsoft, it is 60 percent more efficient than the first-generation Surface Pro. It also comes with USB 3.0 port, microSD card slot as well as a DisplayPort output capable of 3840x2160 resolution output to external display. Surface Pro 2 will be bundled with 200GB of SkyDrive storage as well as a year of free voice calling for landlines on Skype. As expected, it runs on Windows 8.1 OS.

As expected, the Surface Pro 2 will be available in a couple of different configurations so 64 and 128GB models will feature 4GB of RAM while the 256 and 512GB ones will come with 8GB of RAM. The price starts at US $899 in the US and £719 in the UK while the availability is expected on 22nd of October in most of the world. 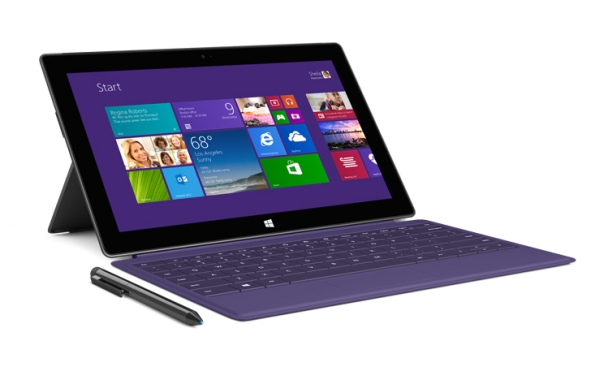