You have to love Archos. The small French outfit is slugging it out with the likes of Samsung and Asus in the tablet market, yet it somehow always manages to stay competitive, by offering great value and regular OS updates even for its cheaper devices.

Archos isn’t shy about experimenting either and it introduced a stylish, keyboard equipped tablet earlier this year. Now though it is going after casual gamers with a dedicated 7-inch design with hardware controls.

The GamePad features a 1024x600 screen, dual-core 1.6GHz processor with Mali 400 graphics and there even a mini HDMI port on board, just in case. Of course, getting Android games to use physical controls is not always easy, but Archos believes it cracked the problem with a clever key mapping app. There’s no shortage of physical controls either, since the GamePad features 14 buttons and two analog thumb sticks to play around with. 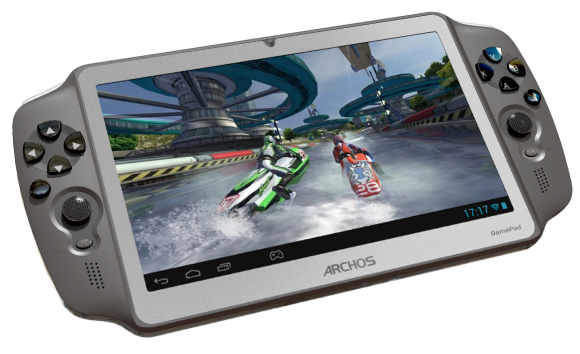 In keeping with Archos’ tradition of going for the latest OS versions, the GamePad ships with Android 4.1 and at €149 it priced rather sensibly. The tablet is currently rolling out in Euroland and the US should get it in Q1 2013.

It might not be the fastest or sexiest device out there, but if the GamePad takes off, it could change the way we think about Android gaming and open the door to a whole new breed of devices.

Last modified on 07 December 2012
Rate this item
(0 votes)
Tagged under
More in this category: « iPad shipments to hit up to 26 million units in Q4 Lenovo announces Thinkpad X1 Carbon Touch »
back to top