Courtesy of Light Peak
Sony has introduced its new VAIO Z series 13-incher with a twist. The Z is Sony’s first notebook to feature Light Peak technology, which enables it to use external graphics housed in an optional media dock.

Intrigued? Well, AMD pioneered the external graphics concept some three years ago with its Puma platform, but it found few takers for its XGP system. However Sony’s Power Media Dock relies on Light Peak to communicate with the external HD 6650 core. When it’s not connected, the VAIO Z sticks to Intel HD 3000 graphics. The dock also houses USB 3.0, VGA and HDMI ports, along with a slim 5.25-inch bay for some optics. 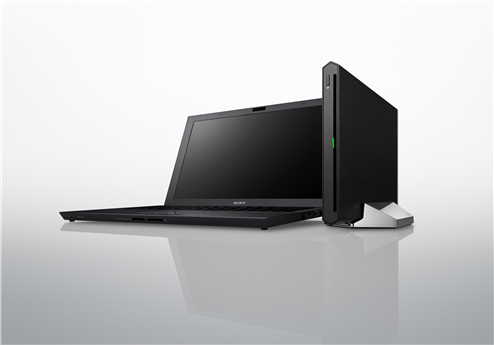 As for the laptop itself, we are looking at a slim and stylish 13.1-incher, with a high resolution 1600x900 screen. It weighs just 1.2kg and it measures 16.6mm on the waistline. It comes with a choice of Intel Core i5 and i7 processors and a wide range of options, including the dock, SSDs and other toys.

It’s an impressive piece of kit, but as you might have guessed, it also packs a hefty price tag. The base will set you back more than $2,300. This includes a 128GB SSD, but you will have to pay more than $600 extra for the dock. All in all, we don’t see many takers.
Rate this item
(9 votes)
Tagged under
More in this category: « Asus' slim Eee PC X101 to hit retail next month Lenovo outs Fusion packed ThinkPad X121e »
back to top