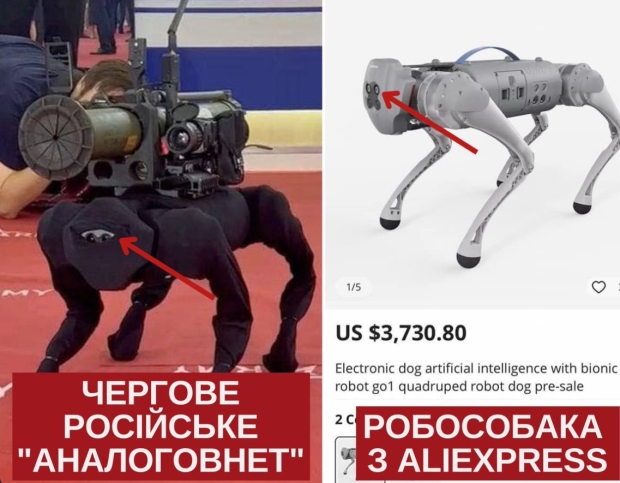 Pretending to have invented them

The Russian military, desperate for good news to put on state media, has been dressing up Chinese robots and claiming to have invented them.

This week the Tsar Putin’s finest military minds showed up on Russian state-sponsored media RIA Novosti with a robot camera dog showed up with a grenade launcher.  This will certainly put the fear of Putin into Ukraine and anyone else who crosses the glorious Russian empire.

Glorious “Russian designers presented a sample of the M-81 robotic complex, capable of aimed shooting and transporting weapons, at the Army-2022 forum and claimed the bot belonged to engineering company JSC "Intellect of Machines."

RIA Novosti went on to describe the Boston Dynamics Spot analog as capable of both reconnaissance and combat missions, plus tasks like delivering medicines and weapons amongst rubble, conducting targeted fire, or just patrolling.

The only problem was that many immediately recognised it as Chinese Unitree Robotics' $2,700 Go1 robotic pet dog dressed in a ninja suit. Other than the gun on top it is about as harmless as a baby Yoda doll.

In late July, Unitree tweeted that it "opposes any form of refit and behavior that is harmful or potentially harmful for human beings" and that it only manufactures and sells civilian products. While voiding the warranty is probably the least of the Russian government’s problems.

If it was dumb enough to send the Robot dog into battle it is really easy to jam its commands and turn it into junk.  It is not as if Ukraine does not have hackers than can jam a WiFi. This is because it has zero security to prevent it from being switched off, because being a consumer device it doesn’t need it.