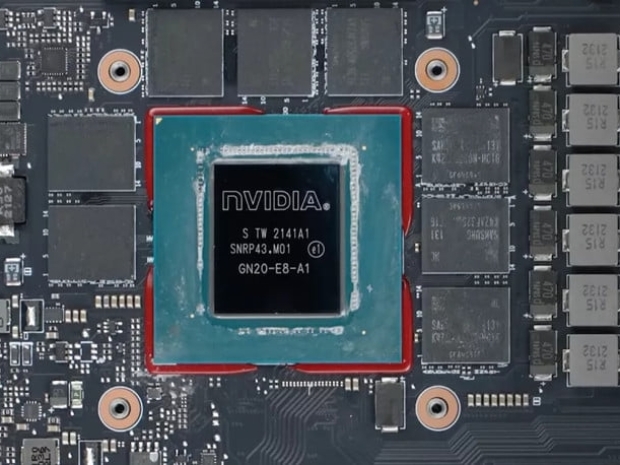 The long rumoured Nvidia GA103 GPU has now been pictured for the first time thanks to the arrival of the RTX 3080 Ti mobility graphics card.

The official introduction of the Ampere-based GeForce RTX 3080 Ti earlier this week led to teardowns of notebooks powered by the video card.
Chinese video blogger Geekerwan has confirmed that it uses the GA103 GPU chip after opening up a laptop that comes equipped with the Nvidia GPU, the GA103 graphics processor, which is labeled as GN20-E8-A1, can be seen.

There hasn’t been much information regarding the GA103 GPU that could be verified until now, the powerful GeForce RTX 3080 Ti seems to be the first card to use the GA103 die.

It has also been confirmed that the GA103 comes with 7424 CUDA cores as opposed to the previously rumoured 7680 CUDA core count. It also has been outfitted with a 256-bit memory bus.

The RTX 3080 Ti for laptops is the fastest mobile GPU ever made, and thus has become Nvidia’s new flagship video card for notebooks. As such, pricing for RTX 3080 Ti laptops start at $2,499. The graphics card itself is equipped with 16GB of GDDR6 memory, representing the fastest memory speeds yet for laptops. Bandwidth speeds are capable of reaching half a terabyte per second.

Nvidia stresses that the mobile RTX 3080 Ti is faster than a desktop Titan RTX. Granted, the RTX is three years old, it means that any card based on the GA103 chip could effectively compete with some of the best PC GPUs on the market.

Meanwhile, laptops that are powered by the RTX 3080 Ti GPU will become available on February 5, 2022. Mobile machines that come with the RTX 3070 Ti will launch on that same date, with prices starting at $1,499.

Last modified on 01 February 2022
Rate this item
(0 votes)
Tagged under
More in this category: « Nvidia wants to use Hopper for new architecture Most developers want Google and Apple tamed »
back to top