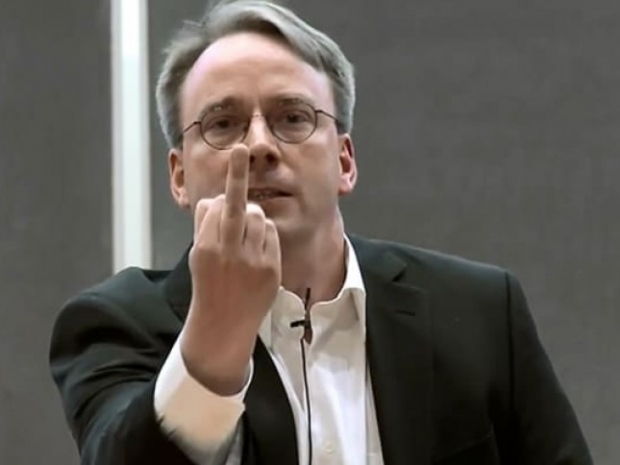 Supported by that great peace-maker and diplomat Linus Torvalds

One does not normally expect to see IT’s Mr Sweary Linus Torvalds taking a diplomatic role, but he seems to be taking such a stance in the case of Paragon.

In March of last year, proprietary file system vendor Paragon Software unleashed a stream of anti-open source FUD about a Samsung-derived exFAT implementation headed into the Linux kernel. Open sourcers fumed in their traditional manner and this did not change when several months later, Paragon seemed to have seen the error of its ways.

It hit the headlines trying to get its own implementation of Microsoft's NTFS (the default filesystem for all Windows machines) into the kernel.  Being closed for that long means  Paragon is finding it harder to get its processes and practices aligned to open source-friendly ones, but Linux kernel BDFL Linus Torvalds seems to have taken a personal interest in the process.

After nearly a year of effort by Paragon, Torvalds continues to gently nudge both it and sceptical Linux devs in order to keep the project moving forward.

Paragon's version of NTFS does not appear that useful as the Linux kernel already has one implementation of NTFS, and most distributions make it incredibly easy to install and use another FUSE-based implementation (ntfs-3g) beyond that.

However, the in-kernel implementation of NTFS is extremely old, poorly maintained, and should only be used read-only and ntfs-3g's performance is abysmal. Paragon's ntfs3 completed automated testing in 8,106 seconds -- but the FUSE-based ntfs-3g required a whopping 34,783 seconds.

Bugs and performance aside, ongoing maintenance is a key aspect to Paragon's ntfs3 making it in-kernel. Torvalds opined that "Paragon should just make a pull request for [ntfs3]" -- but he did so after noting that the code should get OKs from current maintainers and that Paragon itself should maintain the code in the future.

Torvalds seems determined to find a performant, modern, maintainable replacement for the ancient (2001-era) and seldom-used ntfs implementation in the kernel now. If Paragon remains willing to keep playing, it seems likely to get there eventually -- perhaps even in time for the 5.15 kernel.

Last modified on 09 August 2021
Rate this item
(1 Vote)
Tagged under
More in this category: « Employers want cameras in homes The future of cryptocurrency in the US is nearly decided »
back to top