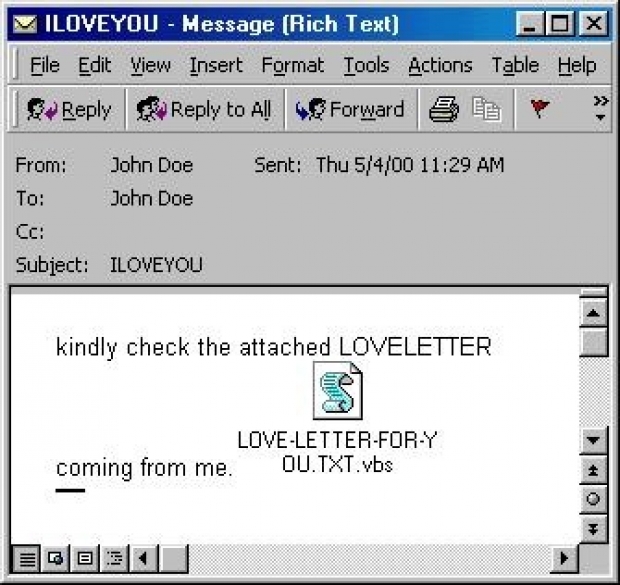 The man behind the world's first serious computer virus outbreak has finally admitted his guilt, 20 years after his software infected millions of machines worldwide.

Filipino Onel de Guzman, now 44, says he unleashed the Love Bug computer worm to steal passwords so he could access the internet without paying. He claims he never intended it to spread globally.

And he says he regrets the damage his code caused. "I didn't expect it would get to the US and Europe. I was surprised", he said in an interview for Crime Dot Com, a forthcoming book on cyber-crime.

De Guzman had not commented publicly since around 2000, until this week when author Geoff White tracked him down to the phone repair shop he now runs in Manila, where he admitted to authoring the virus.

The Love Bug pandemic began on 4 May, 2000. Victims received an email attachment entitled LOVE-LETTER-FOR-YOU. It contained malicious code that would overwrite files, steal passwords, and automatically send copies of itself to all contacts in the victim's Microsoft Outlook address book. Within 24 hours, it was causing major problems across the globe, reportedly infecting 45 million machines...

He claims he initially sent the virus only to Philippine victims, with whom he communicated in chat rooms, because he only wanted to steal internet access passwords that worked in his local area. However, in spring 2000 he tweaked the code, adding an auto-spreading feature that would send copies of the virus to victims' Outlook contacts using a flaw in Microsoft's Windows 95 operating system.

In five hours, ILOVEYOU spread across Asia, Europe and North America, some 15 times faster than the Melissa virus did when it struck a year before, infecting over one million computers.

Soon after starting business on May 4, the United Kingdom's House of Commons had to take its overloaded email servers offline, as did the Ford Motor Company and even Microsoft, whose Outlook software was the primary means of spreading the virus.

Guzman got away with it, not because the coppers could not track him down, but because there was a lack of a law in the Philipines to charge him with.  That was fixed as a result of the Love Bug situation but the law could not be made retroactively.

The love bug and its variants would cause some $10 billion of damage, the FBI later estimated, before updates to anti-virus software and email clients reined them in. To this day, ILOVEYOU remains one of the farthest reaching viruses, striking millions of machines in countries across the world.
Last modified on 04 May 2020
Rate this item
(1 Vote)
Tagged under
More in this category: « Bitcoin will hit $10,000 Nvidia's top boffin makes an open-source ventilator »
back to top