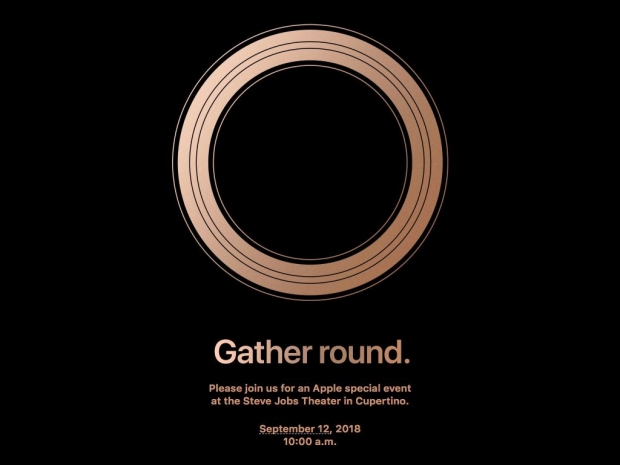 Apple has now officially sent out invites for its "Special Event" which will be held in the Steve Jobs Theater in Cupertino on September 12th.

As rumored earlier, we will probably see the entire new iPhone lineup, or precisely, a total of three iPhone models, if not more. Earlier rumors suggested that we will see an updated 5.8-inch iPhone, cheaper 6.1-inch iPhone with LCD screen and a new 6.5-inch flagship, which should be the star of the event.

Some sources also suggest that we could also see new iPad devices, specifically the iPad Pro lineup. Rumorville is also brewing about the fourth generation Apple Watch, which could be the big surprise that Apple is preparing to show at the Cupertino event. Some rumors also go as far as suggesting a refresh to the MacBook Air lineup.

The invite does not show much other than a big gold circle, which could pretty much be anything.

Of course, all eyes are on Apple and this event as the company has been under a lot of pressure from the competition, so it needs a game changer, and this event might be the one to bring it.

Last modified on 31 August 2018
Rate this item
(0 votes)
Tagged under
More in this category: « FTC to investigate Google over Trump allegations Open source economics borked »
back to top