TSMC confirms the reign of Liu and Wei 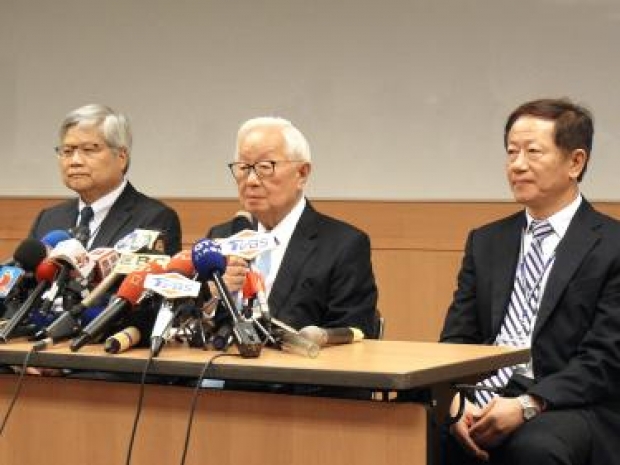 Liu has  been a Co-Chief Executive Officer and Co-President since November 12, 2013 and as its Additional Director since June 8, 2017.

Wei joined TSMC in 1998 and currently serves as President and Co-Chief Executive Officer. Prior to his recent appointment, Wei was TSMC's Co-Chief Operating Officer from March 2012 to November 2013. From 2009 to 2012, he was TSMC’s Senior Vice President of Business Development.

Morris Chang (centre) in October 2017 disclosed plans to retire immediately after TSMC's annual shareholders meeting in June 2018. Chang predicted the move in October saying that  TSMC would be under the dual leadership of Liu and Wei after he cleaned out his desk. He favours dividing the CEO role although that did not work very well for Blackberry.

The pair will have their hands full as TSMC grapples with a slowdown in a smartphone market that has powered growth over the past decade.

Although TSMC is still likely to generate record revenue and profit for 2018, it cut its full year revenue growth target to about 10 percent, from up to 15 percent, in US dollar terms in April. It cited lacklustre demand for premium phones, widely recognised to refer to iPhones.

"We saw Apple scaled back orders in the current quarter amid weakening demand and also learn from supply chain checks that Apple gave a very conservative forecast for the upcoming iPhones in the second half", said Mark Li, an analyst at Bernstein Research.

At the same time, TSMC is building a $24 billion advanced chip project, pouring in record capital expenditure of up to $12 billion in 2018 to secure the next growth opportunities in artificial intelligence, despite the rising cost and challenge of producing leading-edge and more powerful chips. The new leadership also needs to deal with growing competition from Samsung Electronics, the world's biggest memory chipmaker, which has pledged to expand its foundry business. And, like most tech companies in the world, they must also deal with the uncertainties brought by trade friction between Beijing and Washington.

Last modified on 05 June 2018
Rate this item
(0 votes)
Tagged under
More in this category: « Microsoft confirms it has bought GitHub Software piracy decreases worldwide »
back to top