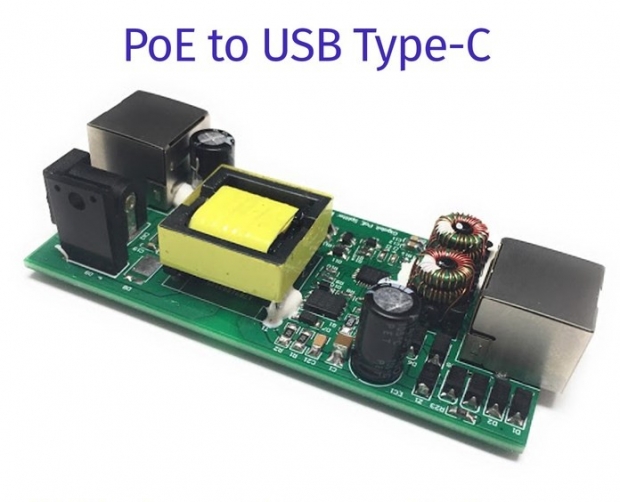 USB-C with PD and Power Over Ethernet

As many manufacturers including Apple, Google, and Samsung standardise on USB Type-C (USB-C) with the new Power Delivery (PD) protocol, CoolGear and PoE Texas have joined forces to combine USB-C with PD and Power Over Ethernet.

In early 2018, PoE Texas will launch the POE-USBC-Kit and the AT-USBC-Kit which will allow USB-C PD over Ethernet.

While USB Type-C Power has ten times the power capacity of earlier USB protocols, USB-C powers modern electronics with the ability to charge a phone in 15 minutes or simultaneously charge a laptop and power an external monitor.  Unfortunately, finding a USB-C charger compatible with a variety of devices has proven consistently challenging for consumers. CoolGear developed the CG-DCPD21W, a sleek, cost-effective USB-C PD device with the broadest possible compatibility.

PoE Texas has created an AT-USBC-Kit - a custom 802.3af/PoE+ splitter that supports 25 watts PoE+ (both active and passive).

It is 24 Volt Passive for those who want to control both the Power Supplying Equipment (PSE) and the Powered Device (PD). The POE-USBC-Kit uses the 24 volt PoE standard at up to 25 watts.

It is based around uPoE (IEEE 802.3bt) which is likely to be the new standard in 2018. PoE Texas has developed 60 watt PoE PSEs with upcoming designs for 60 watt PoE splitters to support full capacity USB-C PD.

Last modified on 27 December 2017
Rate this item
(0 votes)
Tagged under
More in this category: « Apple faces more bad news on IPhoneX Geeks hiring hookers from work »
back to top